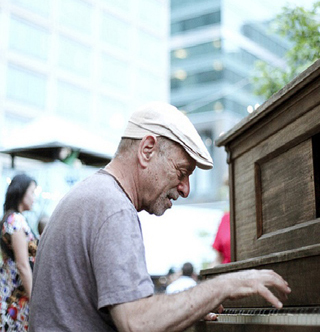 Erwin Helfer is a Chicago boogie-woogie pioneer and master. He has created his own piano music legacy. Erwin has been performing and playing piano for more than forty years. Erwin’s musical development has been influenced by the sounds and personalities of past blues and boogie woogie pianists. Erwin accompanied Mama Yancey for many years. Later, he recorded an album with her. Sunnyland Slim, Speckled Red and Cripple Clarence Lofton were also his mentors and influenced. In the 60’s and 1970’s Erwin recorded two piano duet albums together with Jimmy Walker, his long-time performing and recording partner. Peter J. Welding (one of the most respected blues scholars and historians of all time) wrote that Helfer “mastered the rhythmic as well as melodic subtleties of blues piano style”. He also recorded “Heavy Timbre”, which features Chicago blues piano players, as well as several Lps on his own label Red Beans and two CDs on Austrian Label CMA. Erwin not only has the ability, feel, and drive to be a master of blues piano music, but he also pushes it in a completely new direction. His music is elegant, lively, and sometimes beautifully dissonant. Erwin’s classical music training enables him to interpret the simple, percussive boogie blues and boogie style of a boogie piano like no other. His classical training does not influence his piano playing; he is fluid and easygoing, not rigid. Chicago has always been proud to have Erwin Helfer as a musical treasure. Erwin Helfer performs at Chicago clubs regularly and every year at the Chicago Blues Festival, earning rave reviews from Chicago Magazine and The Reader. His strong following has grown in Chicago and abroad through his local gigs as well as frequent European tours. (From the liner notes of the CD “I’m Not Hungry but I Like to Eat – Blues” – The Sirens Records, SR-5001) www.erwinhelfer.com