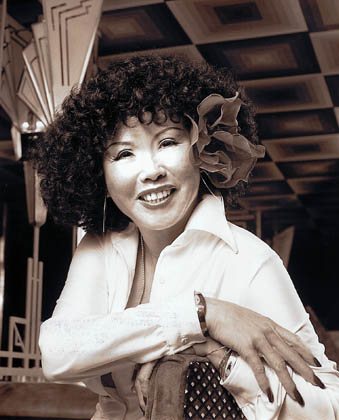 Wikipedia’s free encyclopedia Ethel Azama was an American jazz singer and recording artist. She lived from August 28, 1934 to March 1984. Between the mid-1950s to 1984, she sang in nightclubs and other venues. She was born in Honolulu and raised there. She was a Nisei, or second-generation Japanese American. Career In 1955, she began her professional career as an emcee in the Oasis club in Honolulu. The club was used as a venue to host musical revues from Japan. She began singing standards in 1956 at U.S. military clubs, such as The Cannon Club on Diamond Head. Paul Conrad, a pianist, was often her accompanist at her gigs. Many of her arrangements were also written by Conrad. In 1957, she was opening Waikiki Beach nightclubs for popular blues singer Josh White and singer Herb Jeffries. Martin Denny, the bandleader, helped Azama to get a one-album contract with Liberty Records in 1957 or 1958. In 1958, she released Exotic Dreams. Paul Conrad orchestrated the album. She sang standard songs like “Speak Low” or “Autumn Leaves”. The album also featured a few hapahaole numbers as well as a Japanese folk song. In January 1959, she made her American mainland singing debut at Ye Little Club in Beverly Hills. Jimmie Rodgers, a pop singer, attended one of her shows. Liberty Records executives agreed to let her record another album. Cool Heat, the 1959 album, is entirely American standards. Ethel sings a mixture of ballads like “My Ship” (music and lyrics from Kurt Weill) and “Like Someone in Love”, (music and lyrics written by Johnny Burke), and rhythmic tunes like “Johnny One Note” by Richard Rodgers with lyrics by Lorenz Hart. Songs like “Daybreak”, which is music by Ferde Grofe with lyrics by Harold Adamson, show her love for jazz. Marty Paich orchestrated the musicians that accompanied Azama throughout the recording. The orchestra was composed of well-known jazz musicians such as pianist Russ Freeman and alto saxophonist Art Pepper. The band is brassy, wailing on up-tempo numbers, and lush with strings for the ballads. Azama performed in nightclubs throughout Los Angeles, New York City and Chicago between 1959 and 1960. Azama also performed in Las Vegas casinos with Mel Torme, a jazz singer and the Four Freshmen jazz vocal group. She appeared on the national television variety show Music on Ice in May 1960. Azama performed several songs in the one-hour-long special, which also featured Jacqueline Du Bief (French figure skater), Takeuchi Keigo (Japan dancer), and Johnny Desmond, singer-host. In the 1960s, she moved to Australia and began appearing in nightclubs as well as on radio and television in Australia. In 1964, she married John Todd, an Australian pianist. Ethel and John Todd performed in many nightclubs in Hong Kong including the Eagle’s Nest at Hong Kong Hilton Hotel Family. In the late 1960s, Ethel married John Todd. Ethel was the mother of their two children. She sang again in Waikiki Beach nightclubs, sometimes as a soloist. In the mid-1970s, she had minor roles in acting on several episodes of Hawaii Five-O. Death She sang on a regular basis at nightclubs on Oahu, and in other venues throughout the island until she died in 1984 from a cerebral aneurysm. Sources http://en.wikipedia.org/wiki/Ethel_Azama User-contributed text is available under the Creative Commons By-SA License and may also be available under the GNU FDL.