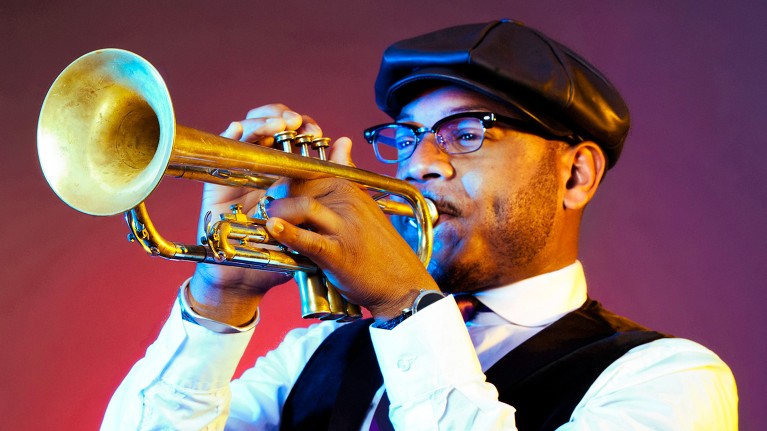 Etienne Charles was born on the island Trinidad in 1983. Etienne has a musical heritage that stretches back at least four generations. His great-grandfather Clement Monlouis, an overseas French minister of Martinique, immigrated to Trinidad in 1983 bringing his folk music to Mayaro. Ralph Charles, Etienne’s grandfather, is a member and a founding member of Phase II Pan Groove. Etienne would join this progressive steel band later on. Etienne was surrounded by his father’s extensive record collection and intoxicated with the sounds and rhythms of African Shango drumming and calypso. The Bishop Anstey Junior School was Etienne’s most important source of inspiration. He learned to play the recorder at this school. He was 10 years old when he received a trumpet from an uncle. His loud sound became a nuisance to the neighbors and he was forced to take formal lessons. His musical achievements were only eclipsed by his academic and sporting success. He was an athlete at Fatima College, where he was also a member the school’s swimming, cricket and water polo teams. He won the Provincial Cup three more times, the first time at age 13. Etienne also briefly studied trumpet with Major Edouard Wade. He then went on to study at the Brass Institute, where he quickly became the youngest member of TBI brass’s professional band. Etienne also learned drums and percussion, landing his first theatre job as a pit drummer for the local productions of “My Fair Lady” and “Treasure Island”. Etienne was also accompanying his father on the annual ritual of playing on the roads during carnival season on J’ouvert morning, carnival Monday, and Tuesday, as well as the Panorama steel pan contest with Phase II. Etienne, a musically gifted sixteen-year-old, attended the Berklee College of Music’s summer performance program. There, he studied with Lin Biviano (pianist) and Tiger Okoshi (pianist). This was a pivotal moment in Etienne’s life. Etienne was awarded a scholarship to the Florida State University. He studied under Marcus Roberts, a pianist and teacher. Etienne graduated in 2005 as the College of Music Brautlecht scholar with a Bachelor of Arts in music. Etienne was second in the International Trumpet Guild Jazz Competition, Bangkok, Thailand, and performed at The Hague’s North Sea Jazz Festival, The Hague, Netherlands, in 2005. He placed 1st at the National Trumpet Competition, Fairfax, Virginia in March 2006. In the summer 2006, he was attending the Henry Mancini Institute Los Angeles, where he recorded the album Elevation. He received two Grammy nominations. Etienne was awarded a full scholarship to study at the Juilliard School of Music, New York City. He studied with Joe Wilder, Mark Gould and Chris Jaudes at Juilliard. He also toured extensively in Qatar, Costa Rica and Aiken, SC with the Juilliard Jazz Orchestra. He became fascinated by the New York City jazz scene and began freelance work in NYC. He has recorded and performed with many greats, including Wynton Marsalis and Johnny Mandel, Roberta Flack, Wynton Marsalis, Ralph MacDonald and Maria Schneider, as well as Marcus Roberts and Monty Alexander, Wycliffe Gordon and Wycliffe Gardiner, Wycliffe Gordon and Rene Marie Blakie, and David Rudder. Culture Shock (2006) is his debut album. It features a unique mix of Afro-Caribbean rhythms as well as straight-ahead jazz. Marcus Roberts, the pianist extraordinaire, is featured with Ralph MacDonald and Vincent Gardner, trombonists, Len “Boogsie”, Sharpe, and the hard-swinging rhythm section of Rodney Jordan (bass) and Leon Anderson (drums). Charles’s many influences were brought together by this all-star ensemble, creating a fresh, modern, and urgent musical presentation. Etienne was a leader in the Museum of Modern Art Summergarden Series in New York City. He premiered “Folklore Tales” – a collection of original music inspired from the Trinidadian folklore characters. Folklore is Etienne’s 2009 album of original music. Jazz improvisation and harmony are combined with folk rhythms, chants, and chants that reflect the African experience in Trinidad.