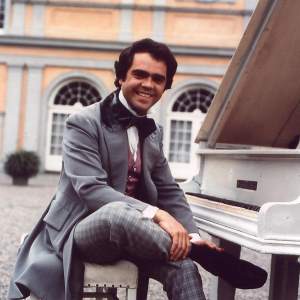 Eugen Cicero, a Romanian-born child, was born Eugen Ciceu on 1940. He began playing piano at the age of four and performed his first Mozart Concerto at the Symphonic Orchestra of Cluj-Napoca (Klausenburg) at six. By the age of 14, he was well-known as a child prodigy. His parents supported him in developing this talent and helped him improve his skills. When he was 11, he went to study with Aurelia Ceonca, who was a well-known pianist in Romania and was herself a Franz Liszt student. Later, Cicero studied under Anna Pitis, who is believed to have “initiated” him into the virtuoso tradition of Franz Liszt. Cicero later studied composition and instrumentation at the National Conservatory Bucharest. Cicero was in East Berlin during the 1960s and managed to flee to the West. Charly Antolini was the drummer on Cicero’s later recordings. The rest is history, they say. Many of his recordings feature jazz arrangements of classical music. http://livingwithmusic.com/2006/11/06/eugen-cicero/ User-contributed text is available under the Creative Commons By-SA License and may also be available under the GNU FDL.