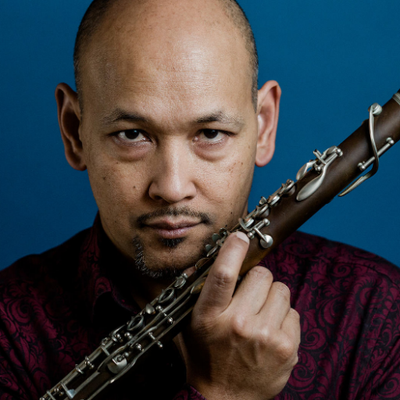 Evan Christopher, clarinetist, combines virtuosity with immaculate taste and enthusiasm, while also being deeply committed to exploring all aspects of the New Orleans Jazz tradition. He is rooted in the musical vocabulary of early Creole clarinetists like Sidney Bechet and Omer Simeon and has developed a personal brand of “contemporary jazz” that aims to continue the legacy of this unique clarinet sound. Christopher’s journey with Clarinet Road began when he moved from California to New Orleans in 1994. He was eager to be part of America’s most historic and important music scene. Al Hirt, veterans of Preservation Hall, funk and brass band members, as well as musicians from other styles, were among his collaborators. He then left to join the Jim-Cullum Jazz Band in San Antonio in 1996. He was their clarinetist for nearly three years and recorded many of their syndicated radio programs Riverwalk: Live from the Landing. Christopher returned to New Orleans as an ambassador for the New Orleans clarinet music style. He has also recorded with New Orleans musicians like Big Al Carson and Narvin Kimball. He traveled extensively after the Federal levees collapsed in August 2005 in the aftermath Hurricane Katrina. He even briefly stayed in Paris at the French government’s invitation. During his artist-residency, he founded his current groups, JazzTraditions PROJECT u0026 Django a la Creole. Their debut CD, “Django a la Creole”, was released in 2008 by the latter. It fuses Gypsy Swing with New Orleans grooves, rhythms of le monde Creole and New Orleans grooves. “Finesse” (Fremeaux) was their second release.