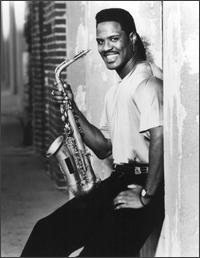 Everette Harp, born August 17, 1961, in Houston, Texas, is an African American gospel, blues, and jazz saxophonist. She has recorded on Blue Note as well as Capitol Records. Harp’s 2006 album In the Moment debuted at the top of the Contemporary Jazz Chart. Everette Harp began playing piano at age two and started saxophone lessons at four years old. Harp was the youngest of eight children born to a minister. Gospel music was Harp’s first exposure. Harp began playing jazz in highschool and graduated in the 1980s from North Texas State University as a music major. He joined Phi Beta Sigma while he was at North Texas State University. Harp was an accountant for a brief time. He also played in Houston jazz/funk groups, including The Franchise. This local band released its own album in Houston, which featured Harp’s 1987 recording of “There’s Always Hope”. Harp moved to Los Angeles from Houston in 1988. Harp immediately began touring with Teena Marie and then with Anita Baker. Harp’s self-titled solo album was released in 1992. Soon after Harp appeared at the Montreux Jazz Festival and started appearing weekly on The Arsenio Hall Show. He continued to play.