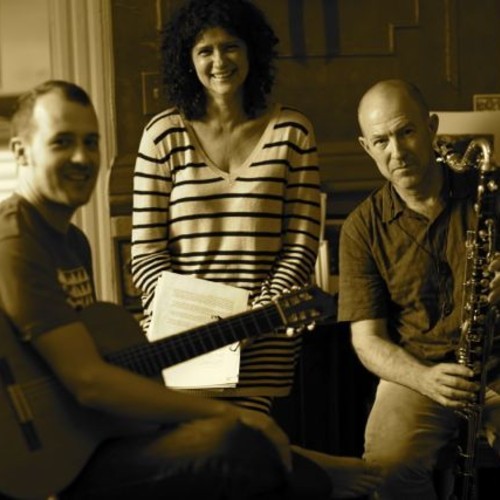 EVIYAN is Iva Bittova, Gyan Riley & Evan Ziporyn – 3 unique composer/performers merging into a singular sound, a blend of world roots, post-minimalism, and jazz. These eclectic, genre-crossing musicians, join forces to create a soundtrack for the 21st century global village – simple, organic and direct, a music of intensity and lyricism, earthy impact and instrumental virtuosity. EVIYAN’s musical roots are the lifetime experiences of its three members, each having traveled the globe for decades, collaborating with master musicians on every continent, forging their own paths, finding kindred spirit and inspiration. Legendary vocalist/violinist Iva Bittova draws on the sounds of her native Moravia, and her lineage in the rich traditions of Slovakia and the Roma people. Her captivating and unforgettable vocal palette, ever expanding, merges these age-old practices with an urban, avant-garde sensibility. Clarinetist Evan Ziporyn has toured the globe for over 30 years in search of new musical possibilities, studying with Balinese gamelan masters and collaborating with astonishing musicians from around the world including India, China, and Senegal. His 25-year involvement with New York’s Bang on a Can brought him into close collaboration with many of the world’s most cutting edge musicians and composers. Guitarist Gyan Riley brings the virtuosity of two venerable traditions – western classical guitar and the rigors of Hindustani music – together with the harmonic deftness of jazz and the grit of rock-and-roll. A voice and a violin, a clarinet and a guitar, yet EVIYAN is more than the sum of these simple parts. Over the years, these three musicians’ paths have crossed and re-crossed, each recognizing an energy in the others and a synergy in their shared work. Now they have come together, composing all new material for one another, creating a new but very natural sound. Three distinct paths, three composer/performers, yet with a shared ethos: the idea that music must reflect its roots but not be bound by them. All committed to making a music that engages the mind, moves the body, and frees the spirit. from http://www.eviyan.org