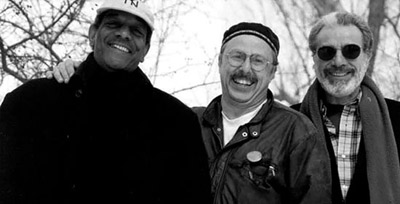 Joe Fonda, a Manhattan-based bassist, assembled the unusual trio on an uncanny intuition that the combination musical personalities and sonorities would make a compelling band. After the FAB Trio’s Transforming the Space (CIMP) release, they have been touring and performing festivals for six years and continue to explore the dynamics of the group. Since the 1970s, Barry Altschul has been a key figure in contemporary jazz. He has provided his sensitive accompaniment on projects such as those by Chick Corea and Anthony Braxton. Billy Bang, one of the greatest violinists of jazz history, is a name that should be included alongside Joe Venuti and Stuff Smith in the annals. As well as collaborating extensively, he also led his own projects, including Vietnam: The Aftermath which was highly praised and a powerful reflection on his Vietnam War service. The FAB Trio is a collection of some of the most innovative and original jazz musicians from American improvised music history. Allaboutjazz