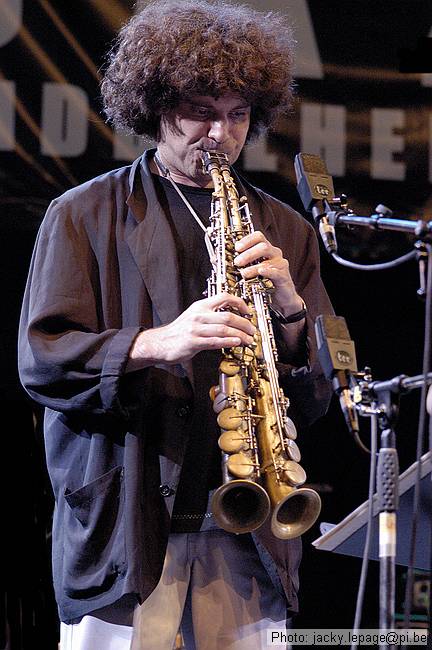 Fabrizio Cassol, a Belgian saxophonist, was born June 8, 1964. He is also the first to use the aulochrome (a double-soprano saxophone). He was born in Ougree (Belgium). He studied at the Liege conservatory between 1982 and 1985 and received a first prize in saxophone and a major in chamber music. He received his degree in composition and improvisation. Cassol started touring with Trio Bravo, which he formed with Michel Massot u0026 Michel Debrulle. He traveled to Central Africa with his colleagues Stephane Galland, Michel Hatzigeorgiou and the Aka pygmies in 1991. After their return, they formed Aka Moon which is still Cassol’s main venture. He has also performed with Frederic Rzewski and Garrett List as well as musicians such as William Sheller, Jacques Pelzer or Toots Thielemans, David Linx, Kris Defoort, DJ Grazzhoppa and DJ Grazzhoppa. He has also composed music for dance theatre. Anne Teresa De Keersmaeker’s I Sais I and Pitie!, Alain Platel (VSPRS. Pitie!, Coup de Choeurs], Comedie Francaise Paris, Tj Stan. Luc Bondy. Philippe Boesmans. He co-wrote the 1995 album Variations On A LOVE Supreme with Kris Defoort. In 1998, he won the Belgian Golden Django for best French-speaking artist. Francois Louis created the aulochrome instrument, which he has been using since September 10, 2001. In October 2002, he presented the instrument to Parisians. He currently lives in Brussels, and teaches at Etterbeek’s music academy. From Wikipedia