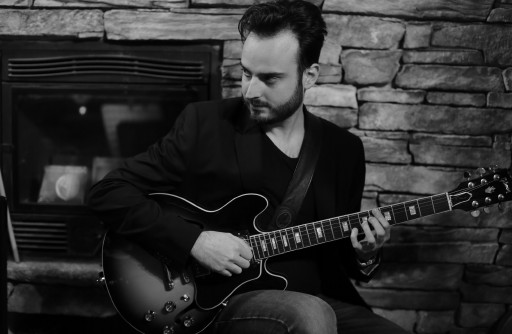 Graduated from the Giuseppe Verdi Conservatory of Milan in Jazz Guitar. He was born in Verbania, Italy, on the 08/25/1992. At 15 he started studying rock / pop guitar with Patrizio RAMetti, and later jazz theory and harmony with Fabrizio SPADEA. In 2013, he earned his graphic design degree. In 2014, he was accepted by Conservatorio Giuseppe Verdi after a rigorous preparation with M. Fabrizio Spadea. He will study with Bebo Fera, Tino Tracanna and Attilio Zanchi. He performed live in Italy and Switzerland with various bands, including jazz, blues, pop and funk. He is also a private teacher. Over the years, he has developed his own teaching method that he continues to improve upon. He will be teaching at the LikeMusicSchool Verbania starting in 2021. He will be performing at the Giuseppe Verdi Conservatory’s 2015 EXPO2015. He will release “Nehan” in 2016 with Daniela Albertini. He will record Simone Prando’s “With a Star in the Brain” with Achille, Gino Zambelli, and Marco Tiraboschi in 2017. He will release “Wind Rose”, his first solo album, in 2019 with his composition. Also, he will record the EP “Live” on the flaute with Nicola Rizzo and the album “Call of Cthulhu”, with librinpillole. He had the chance to play with: Tino Tracanna, Alberto Mandarini, Guido Mazzon, Achille Succi, Gino Zambelli, Simone Prando, Lorenzo Blardone, Marco Tiraboschi, Andrea Cocco, Stefano Zambon… from www.fabrizioprando.com