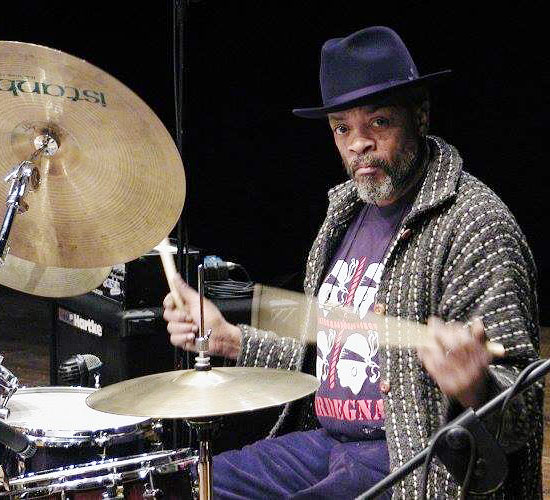 While he has played with many other notable free jazz musicians, Don Moye’s most prominent work is with the Art Ensemble of Chicago, which was the most acclaimed avant-garde group of the 1970s and 1980s. Moye instantly added a more rhythmic sense to the group that had been without a drummer. His presence greatly improved the band’s ability and groove. Moye could swing in a traditional jazz style, but it was his ability to master rhythmic techniques and African and Caribbean drumming instruments that made him stand out from other jazz drummers his age. Moye studied drums at Wayne State University, Detroit. He also worked as a trumpeter with Charles Moore’s Detroit Free Jazz. Moore’s band toured Europe in May 1968. Moye spent the next three months touring Europe and Northern Africa with Sonny Sharrock and Steve Lacy. The Art Ensemble arrived in Paris in 1969. In the two years that had passed since their inception, the band had performed without a drummer. They decided to hire a drummer full-time in Paris and found Moye at American Center for Students and Artists. Moye’s highly active, polyrhythmic and pattern-based style gave the group an energy and cohesion they didn’t have (to some extent). Moye, Jarman, and Favors began to wear African clothing and face paint in performance with the Art Ensemble. Moye is active in other contexts than the Art Ensemble. Moye was a member of the Black Artists Group, St. Louis before he moved to Chicago in 1971. He formed a percussion trio with Steve McCall and pianist Randy Weston in the 1970s. Moye recorded and played in many jazz styles, including modal, bop, and free. He joined the Leaders in 1984. This group included avant-jazz stars Chico Freeman and Chico Freeman as well as Kirk Lightsey and Arthur Blythe. Moye was a leader, and recorded on Art Ensemble’s AECO label. In 1975, Moye was a solo percussionist (Sun Percussion Vol. 1); 1993, as coleader of Joseph Jarman/Famoudou Don Moye’s Magic Triangle Band (Calypso’s Smile); 1996, as coleader, with Enoch Williamson, of the Sun Percussion Summit (“Afrikan Song”). Allmusic