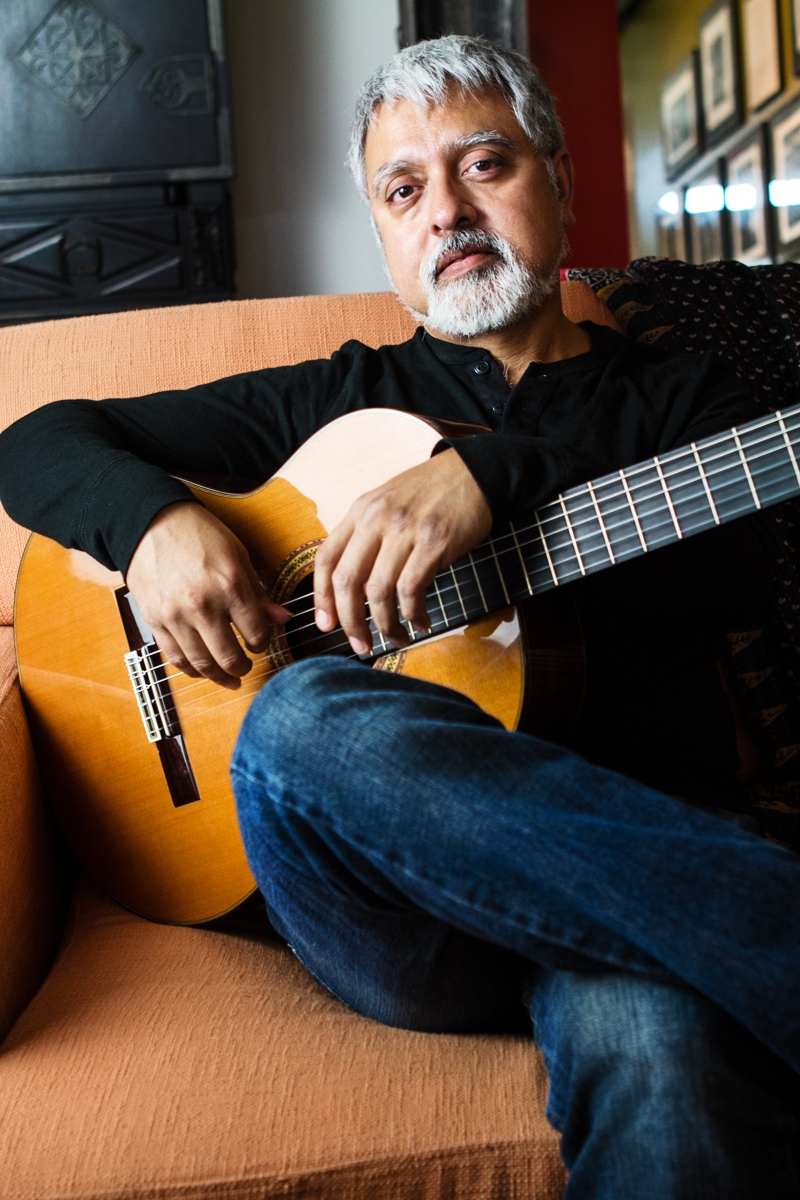 Fareed Haque, a modern guitarist virtuoso, is Fareed Haque. His musical journeys are infused with jazz and classical traditions. Fareed, a Pakistani father and Chilean mom, was born in 1963. His extensive travels and especially extended stays in Spain and France, Iron and Chile, exposed Haque to many different musical styles from an early age. Haque’s music is known for its natural eclecticism. However, Haque was exposed to jazz and blues through frequent visits to Von Freeman’s Chicago jam sessions. Haque was the 1981 recipient of North Texas State University’s Jazz Guitar Scholarship. He spent a year learning from Jack Peterson, a renowned jazz guitarist. Fareed’s interest in classical guitar led to him transferring to Northwestern University to study classical guitar under Anne Waller, John Holmquist, and David Buch. Soon after his transfer to NU, Haque came to the attention of multi-instrumentalist Howard Levy and joined his latin-fusion group Chevere. Thru Levy Haque met Paquito D’Rivera, a Cuban NEA Jazz Master. This began a long and productive relationship. Many world tours and recordings, including Celebration, Havana Cafe’s Tico Tico, Live at the MCG, Celebration, Havana Cafe and Tico Tico were to follow. The award-winning classic Reunion, featuring Haque, Arturo Sandoval and Danilo Perez as well as Giovanni Hidalgo and Mark Walker, is particularly noteworthy. Through D’Rivera Haque was discovered by Sting, who had just started his record label Pangaea. Sting invited Haque into the label, and he released two critically acclaimed records Voices Rising (and Manresa). Haque briefly toured with Sting, making notable appearances at The Montreux Jazz Festival and NBC’s Michelob Presents Sunday Night With David Sanborn. However, Haque’s own career demands forced him to move on. Haque was featured on WTTW’s ArtBeat, Chicago Tonight, Ben Sidran’s New visions and Michelob Presents Sunday Night on NBC. He also has his own Lonesome Pines special on PBS and on the BET cable jazz channel. Fareed was twice selected by Downbeat Magazine as a Talent Deserving Wider Recognition. Haque joined the Northern Illinois University faculty in 1988 as a professor of jazz guitar and classical guitar. To this day, he continues to teach at NIU. He did a brief stint at Warner Bros. to record Majestad, which features John Patitucci and Michael Landau. Bruce Lundvall signed Haque over to Bluenote Records. Bluenote was Haque’s home studio. He recorded three albums: Sacred Addiction and Opaque. He also toured extensively and recorded 3 CDs with Javon. Sideman credits include recordings and tours with Joe Henderson and Herbie Mann, Bob James and Richie Cole. Kahil El Zbar and his Ethnic Heritage Ensemble were also recorded. Bluenote recordings were produced by Bob Belden. They featured a host Jazz Legends such as Dianne Reeves and Joe Lovano. There were many classical recitals, as well as appearances by the Vermeer Quartet, as well as performances with many symphonies throughout the US and internationally. This period was filled with an amazing variety of performances. Thru Belden Haque was honored to be asked to join the Zawinul Syndicate with Joe Zawinul. This group was one of Joe’s most diverse and best. Arto Tuncboyacian was the percussionist and vocalist, and Paco Sery was the drummer. Mathew Garrison played bass, and Haque played Electric Guitar and Guistar. Haque was able to return to Jazz/Rock roots after a year of extensive touring. Haque became interested in jam bands and started to form the super-group Garaj Mahal with Eric Levy, Kai Eckhardt and Alan Hertz. The group has been touring the US for over 200 shows per annum for 10 years. Haque joined George Brooks’ group Summit with Zakir Hussain, Steve Smith and Steve Smith. At the 2002 High Sierra Music Festival, Haque was named ‘Most Valuable player’. Haque and Garaj Mahal produced 3 Live CDs and 5 studio CDs: Mondo Garaj and Blueberry Cave. Discovery featured Haque’s first use of the Moog Guitar. Fareed’s Lahara Double Concerto For Sitar/Guitar u0026 Tabla was premiered at Symphony Center in Chicago by maestro Paul Freeman. It featured tabla virtuoso Ustad Zakir Hussain. Fareed was asked to compose a concerto for classical guitar by the Fulcrum Point Ensemble in 2006. In May 2006, Fareed’s ‘Gamelan Concerto’ was performed at The Harris Theatre in Millenium Park. In 2007, Garaj Mahal was awarded an Independent Music Award. Guitar Player Magazine voted Garaj Mahal the ‘Best World Guitarist’ in 2009. His 2009 album Flat Planet reached #1 twice on the World Jazz Radio charts. After ten years of playing over 200 shows per year with Garaj Mahal for 10 years, Haque became interested in electronic music and the Moog Guitar and decided to leave Garaj Mahal. His latest album, Fareed Haque’s MathGames, featured bassist Alex Austin and drummer Greg Fundis as well as keyboardist Jesse Clayton. Haque has been a part of the first Jazz Festival en la Patagonia, Frutillar Chile, under his mentor Paquito D’Rivera. He also performed as an assistant director for the Coleman Hawkins Jazz Fest. Other notable appearances include his own bands at JavaJazz and JavaJazz. Haque performed both the Villa-lobos and Aranjuez guitar concertos in one concert, which is one of the greatest honors and challenges in a life dedicated to music. With The Chicago Philharmonic under the direction of Lucia Matos at Pick-Staiger Concert Hall. Haque continues to record and tour extensively, as well as documenting his unconventional teaching methods through a series interactive video courses through TrueFire. http://fareed.com