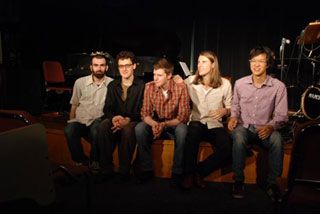 Father Figures is a Brooklyn band made up five friends. Their music is wild and accessible, and it blends the composed with the improvised. This is Zombie Jazz. Unless your grandfather was a juggler of knives, it isn’t your grandfather’s music. Father Figures is a strong-willed and melodic musician who can transform sounds into sculptures that make you move, break vases, and then neatly package them into sets of 30 minutes or an hour. This set is ideal for a basement. They’ll play with any band that plays rock and roll, but they will play anywhere. Sometimes, the band will loop itself. Sometimes, the band is really loud. The band often leaves the audience with a question mark, leaving them unable to understand what they just saw. Father Figures have a new album out on vinyl and digital on Museum People Records. They recorded five hours of improvisations to 4 track cassette and a Navy reel-to–reel 1/4” tape recorder. The album’s debut is 18 tracks. It was created by dumping everything into digital and sorting through it. Father Figures toured the United States in July, driving from California to California in just 28 days and 25 shows. They also had a lot of excited fans along the way. Come join the group and see Father Figures today. from http://www.littlefieldnyc.com