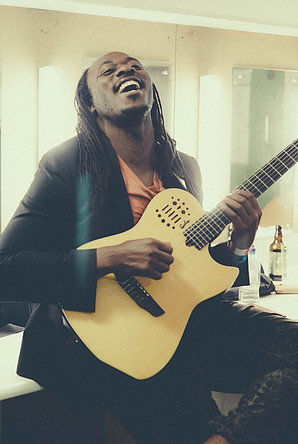 Femi Temowo, a MOBO Award nominee musician, was raised listening to West African pioneers like Sunny Ade, Fela Kuti and Ebenezer Obey. He discovered Charlie Parker, Miles Davis’ “Kind Of Blue” and other classic jazz albums. He was inspired by Wes Montgomery, the great jazz guitarist, when he decided to pursue his love for the guitar. His passion is based on a fusion between these musical influences. Femi was approached by Soweto Kinch in 2002, a critically-acclaimed jazz saxophonist. He asked Femi to join his quartet. The Mercury Music Prize nomination, a BBC Jazz award to the best new group, and numerous MOBO awards were all a result of his phenomenally successful collaborations. His talent and success grew, as did the demand for Femi’s versatility and style as a guitarist. Femi’s skill and intricacy on the instrument of his choice has led to many high-profile collaborations. Femi’s melodic and slick guitar sound has made him an artist alongside many other great musicians. He has played with many artists including George Benson and Dee Dee Bridgewater. From www.femiguitar.com