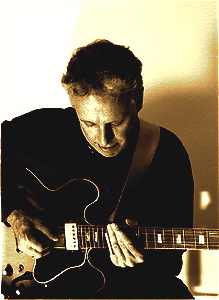 Finn Sjoberg was born in 1951. He was raised musically in Orebro, Sweden. Orebro had a vibrant music scene in the sixties. All kinds of music, from pop to blues to jazz, were important parts of the life at that time. Finn immigrated to Stockholm in 1970 to study. He had poor results. He soon joined the “Swedish Progg”-group “Kvartetten Som Sprangde”. He began to freelance as a musician for different Swedish bands, backing up international stars Harpo or Abba and also supporting local musicians. He was a producer for the Swedish label Metronome and produced many high-quality records as part of his growth. He began a 17-year stint as guitarist for Lill Lindfors, the well-known Swedish singer. Finn decided to give studies another chance in 1983. He earned his Master’s Degree from the Royal Institute of Technology, Stockholm. Since then, he has been a double-digital musician and an IT-professional. Finn has two instrumental albums under his own name: “Guitar Heaven” in 1998. http://www.finnsjoberg.se