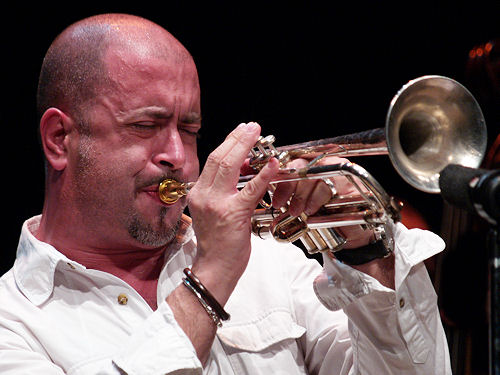 Flavio Boltro was born in Turin on May 5, 1961. His/her father is a musician, trombettista, and great fan of jazz. While his/her mother is an elementary school teacher. Since I was three years of age, I’ve been absorbed by jazz music since then. Before I went to bed, my father put me on my knees and made sure that I listened to Amstrong and all of the discs from the ’60s. Flavio, five years old, is transferred by his family to Pianezza (25 kms from Turin), where he will spend his infancy through to the teenage years. “To nine and a half years old, I told my father that I wanted the trumpet to be my profession.” Flavio’s parents are certain that Flavio wants to be a musician as other boys want to learn to kick and to take a ceramics class. They will be amazed at the seriousness he displays in using this tool every day. It enrolls him at the Conservatory at the age of 13, where he will take lessons from Charles Arfinengo (1a trumpeter of the Symphonic Orchestra in Turin). His/her father will request that the teacher privately follow his/her child for the exam of admission to Conservatory. This will be for seven years. It will live a life of an alumnus and will experience two final moments. They will coincide with the meeting two formations that will give him/her the opportunity to know and appreciate them. Maurice Giammarco drives LINGOMANIA. Although the musician has a quartet, you/he/it can inhale to make it a quintet. Giammarco goes to the Terminal to see Flavio with Mario Rusca’s trio. He/she then calls the next week to arrange a meeting. It is the birth of the famous quintet. Roberto Gatto plays the battery, Furio di you Castrate the contrabbasso and Giammarco the trumpet. Umberto Fiorentino plays the guitar, Flavio the trumpet, and Furio Di You Castrate the contrabasso. This acoustic group from the matrix and from the electric sonorities represents a novelty for that years and receives great success in Italy, awarding himself/herself/itself, for twice consecutive, the prize for the Good Disk and the title of Good Group of the Year. It is 25 years old when it embarks on this adventure. It also begins to get different collaboration applications, especially from Steve Grossman with whom he frequently exhibits. There were 2000 clubs at the time in Italy. I played with Steve a lot, but I also performed with him to international festivals as a quintet with Cedar Walton and Billy Higgins. I also performed with David Williams in the rhythmic section. Few had the opportunity to share the Lingomanias experience with Clifford Jordan or Jimmy Cobb like it did. I also performed two concerts with Freddie Umbria Hubbard jazz, in addition to those of Turin or Milan. » The trio formed with Manu Roche, Furio Di you castrate and Manu Roche to form the battery. This group has been a great success! A trio of trumpets didn’t exist in the time / contrabbasso/ battery. There was only Ornette, but there was any trio. He/she has brought me this idea, and I have spoken to Furio about it. The group became a quartet in your third year of existence with the arrival Joe Lovano. I have made a tour with 12 people in Italy, and have engraved my compositions, Furio and Lovano. But the disk has never been out! » And eccoci was ninety-nine. It was the time of summer! Flavio leaves Corsica with curtain and hair to go… It has the opportunity to help from spectator at the Festival of Bald where it will be performing as a concertista next year in quartet to Manu Roche, Anthony Farao and Paul Dallaporta upon request of Lionel Benhamou. Flavio is able to meet important people during the jams session that evenings. This marks the beginning of the French adventure marks. Laurent Cugny has taken over the ONJ in 1994. He/she is now on the lookout for a trombettista or a saxophonist. The ONJ’s decision rests on Flavio Boltro, and its youth companion Stephen Di Baptist. One year after the end of Your experience with ONJ, Flavio will join the sextet led by Michel Petrucciani. Two musicians, Flavio Boltro and Stephen Di Baptist, have been friends for a long time. They are looking for a quintet. With the addition of Benjamin Henocq to their battery and Rosary Bonaccorso in the lower part, the two musicians will realize their dream. The Stephen Di Baptist/Flavio Boltro Quartet will be a huge success since 1998. This is all history we already know. The quintet is still together today, even though Flavio and Stephen have taken other paths. In fact, they continue to present concerts in double bill (I double-show) with a complete repertoire for every occasion. “I was 17 when I learned how to play the trumpet. I hoped you/he/she would give me the opportunity to live. It is certainly a blessing to be surrounded by people who are generous in your life. bio by www.myspace.com/flavioboltro