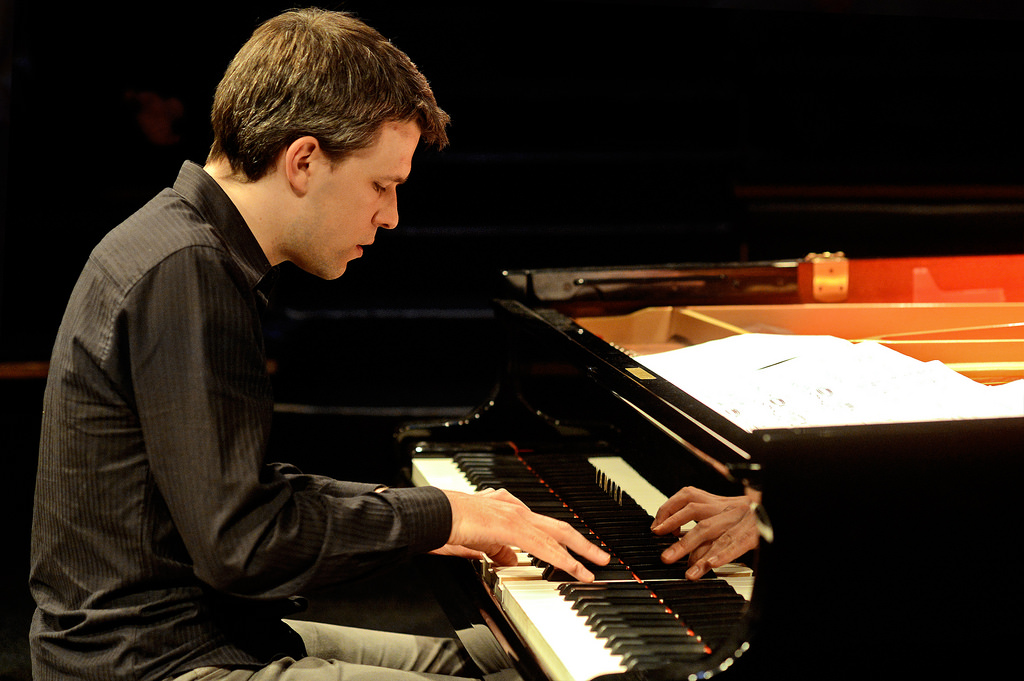 Florian Hoefner has been able to establish himself as a unique voice in modern jazz, both as a pianist and composer. Praised as a “harmonically daring pianist […] reaching toward new sonic territory” by Downbeat and a “composer-bandleader of insightful resolve” by the New York Times, Mr. Hoefner has made his mark as an inventive creator of exciting small group jazz. With his working quartet, the Florian Hoefner group he has released 3 albums on Origin Records that have received rave reviews around the globe. Described as a “starkly picturesque album […] that makes profound statements from quiet moments” by Downbeat and as a “total experience” by the New York Jazz Record his latest release, “Luminosity” featuring tenor saxophonist, Seamus Blake has been his most ambitious project so far. With the group, he maintains a busy touring schedule that has included over 100 dates in Europe and North America to date. After their performance at the Montréal Jazz Festival 2015, Florian was awarded the Stingray Rising Star Award. As a member of the Germany-based collective, Subtone he has released 4 critically acclaimed albums on labels including ENJA Records and performed on 4 continents including festivals like Jazz Baltica (Germany), the Bohemia Jazz Fest (Czech Republic) and Tremplin Jazz d’Avignon (France) where the group was awarded the jury and audience awards at the yearly jazz competition. Florian’s work as a sideman led to numerous additional CD releases including a collaboration with guitarist, Kurt Rosenwinkel on Fresh Sounds Records. He has shared the stage with the likes of Joe Lovano, Seamus Blake, Rich Perry, John Riley and Mark Nuccio. A two-time winner of the ASCAP Young Jazz Composer Award, Florian has also contributed compositions and arrangements to many commercial albums by artists like Till Brönner, Jasmin Tabatabai and Peter Fessler. His big band compositions been performed by the New York Jazz Orchestra, the Lucerne Jazz Orchestra, the German Youth Jazz Orchestra and the DanJam Orchestra. Florian initially began his musical studies in Bavaria, where he played the trumpet and accordion, in addition to piano. After obtaining his first degree in jazz piano from the University of Arts in Berlin, he was granted a Fulbright Scholarship to complete a Master of Music degree from the Manhattan School of Music in New York City where he studied with Jason Moran, Dave Liebman, and Garry Dial. Since July 2014 Florian is a resident of St. John’s, Newfoundland, Canada, from where he continues to embark on new musical adventures. from www.florian-hoefner.com