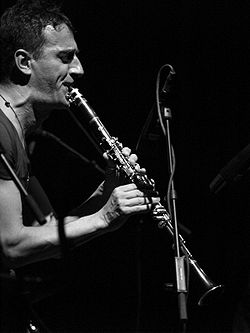 Francesco Bearzatti was irresistibly drawn to free and evolving musical processes. He grew up in Friuli, the northernmost region of Italy. There he shared his first love of music with his peers. They listened to Led Zeppelin, Deep Purple, and then the punk rock of Ramones and Sex Pistols. After graduating in clarinet from the Conservatory of Udine, he continued his studies in New York where he met George Coleman. Bearzatti has recorded many albums as both a sideman, and as a leader. Tinissima 4et is his band. He is also the founder and the leader. He was awarded the Top Jazz, the Academie du Jazz (Paris), and the Best European musician at the Academie du Jazz in 2011. from http://splendoramsterdam.com