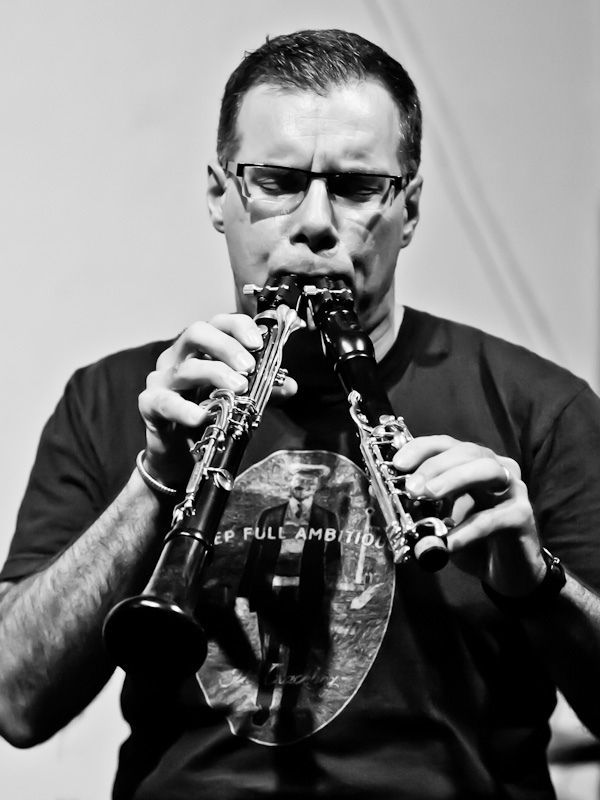 Clarinetist François Houle has established himself as one of today’s most inventive musicians, in all of the diverse musical spheres he embraces: classical, jazz, new music, improvised music, and world music. He has twice been listed by Downbeat magazine as a “Talent Deserving Wider Recognition” and was hailed as a “Rising Star” in Downbeat’s 2008 Critics’ Poll. His extensive touring has led to solo appearances at major festivals across Canada, the United States and Europe, and he has released more than a dozen recordings, earning multiple Juno Award and West Coast Music Award nominations. Houle’s clarinet playing transcends the stylistic borders associated with his instrument. Inspired by musical innovators such as Steve Lacy, John Carter, William O. Smith and Evan Parker, he has developed a unique improvisational language, virtuosic and rich with sonic embellishment and technical extensions. François has performed and recorded with Marilyn Crispell, Evan Parker, Dave Douglas, Benoît Delbecq, Mats Gustaffson, Myra Melford, Ab Baars, Marc Dresser, Georg Gräwe, Joëlle Léandre, and Håvard Wiik. By mastering each of the diverse musical genres he approaches, François demystifies music for his audiences, and has become known as one of today’s most engaging and stimulating musicians. Houle studied at McGill University, went on to win the National Debut competition, and completed his studies at Yale University. He has been an artist-in-residence at the Banff Centre for the Arts and at the Civitella Ranieri Foundation in Umbria, Italy, and was a featured soloist in the International Clarinet Association’s 2007 and 2008 ClarinetFests. He is a faculty member at the Vancouver Community College School of Music, and served as Artistic Director of the Vancouver Creative Music Institute from 2006 to 2010. In 2008 he was appointed as “Associate Composer” of the Canadian Music Centre. François Houle is a Backun artist and clinician. He plays Backun clarinets, mouthpieces, bells, and barrels exclusively. from http://www.francoishoule.ca