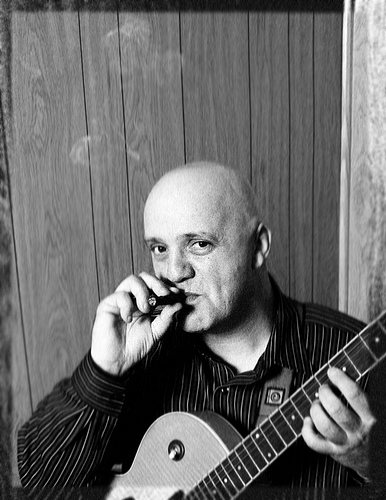 Frank started playing guitar when he was seven years old in Canberra, Australia. He was also born and raised there. He was heavily influenced by blues players like Jimi Hendrix and John Mayall. He discovered Steely Dan, The Brecker Brothers, and Chick Corea in his mid-teens, which led him to jazzy music. He left his home in 1982 to attend the Guitar Institute of Technology (GIT), in Hollywood. He was awarded the Student of the Year award and was then offered a position as a teacher, which he held for four years. He was already playing in local jazz clubs with his own band and had published his first book “Speed Picking” during this period. He signed a three-album deal with Legato in 1986 and began his recording career. Jean-Luc Ponty recruited him to tour in the same year. He auditioned for Chick corea shortly after the tour and began a six year, five-record, and Grammy-award-winning period. Chick exposed Frank to the rest of the world and he is eternally grateful. Frank says that playing with Chick was a dream come true. Frank was approached by Ibanez guitars in the same year to endorse their guitars. This led to a long-lasting relationship that resulted in the Frank Gambale model guitar which went on sale worldwide in 1987. To date, there have been four versions: FGM100 FGM200 FGM300 FGM400. DCI signed Frank a four-video agreement in 1987 for instructional videos. Frank signed his major label agreement with JVC in 1988. He released “Thunder From Down Under” in 1990. It was a hit worldwide and reached #1 on the Japanese Jazz charts. Frank decided that it was time for him to travel alone in 1992 and has continued touring with his band ever since. His own band has taken him to many countries, including Brazil, Argentina and Chile, Australia, Germany. Switzerland, Japan, Switzerland, Japan, the U.S., and more. He has taught master classes and seminars all over the world, even in places as far as Uruguay and South Africa. Frank was appointed Head of the Guitar Department at the L.A. Music Academy in 1996. Frank created the study program and core curriculum for this vocational school. The school has been an incredible success so far and has become a place of inspiration for guitarists all over the world. When he’s not in town, he teaches one day per week and manages the guitar department that he personally selected. He is always busy, whether he is writing an album, book or video, helping to design a guitar model with Ibanez or giving a seminar in Germany. Frank is passionate about his work and finds it rewarding to go the extra mile. “I am amazed that I get paid to do the work I love, and I wouldn’t trade it all for anything.” Text contributed by users is available under Creative Commons By–SA License. It may also be available under GNU FDL.