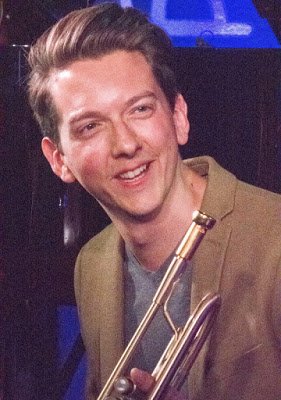 Freddie started playing piano at the age of 6 and began playing trumpet at 7 when he was taught by Dave Amis, a Norfolk jazz legend. Freddie left Norwich in 2004 to go to London. As a child, Freddie was captivated by the music of Louis Armstrong and decided to pursue a career in jazz trumpeting. Freddie was described as “a mix between Kenny Wheeler, Freddie Hubbard” at the 2002 Norwich Students’ Jazz Orchestra performance. He then went on to be admitted to the Royal Academy of Music Junior Jazz program. After studying under Tim Garland, Nick Smart, Noel Langley and Pat White, Freddie graduated in 2008 from the degree program in Jazz Trumpet. Freddie is a NYJO stalwart from 2004-7 and has been a fixture in the British big-band scene over the past eight years. He has been a member since 2007 of the Ronnie Scott’s Jazz Orchestra and plays with the Stan Sulzmann Big Band. Calum Gourlay, another Academy graduate, also runs his own big-band. They have been a part of the London Jazz Festival, and they opened the Con-Fest 2010. One of Freddie’s most prestigious performances was his solo performance on BBC Radio 2 with The BBC Big Band. From facebook