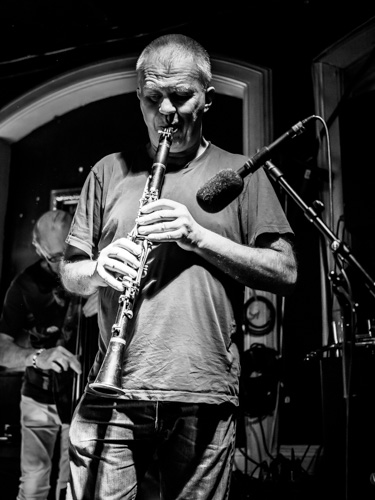 Editor’s Note: For more albums featuring Frode Guerstad, see the entry for Circulasione Totale Orchestra. Norway; saxophones. Frode Gjerstad, one of few Norwegian musicians who play modern improvised music outside of the ‘ECM school’. Because there is no tradition for free improvised music in Norway, he chose to play with foreign musicians. John Stevens was a significant part of his musical and personal relationship that began in 1981. Stevens introduced him to the best British improvisers through Stevens. The long-standing group he formed with Stevens, “Detail”, began as a trio with Eivin One Pedersen on keyboard in 1981. However, Johnny Mbizo Dyani joined the band in 1982 to play bass, and Pedersen left in later that year. They remained a trio up to Dyani’s passing in 1986. However, they invited occasional guests to complete the lineup. In 1986 they toured Britain as a quartet with Bobby Bradford as cornet. Bradford went on another tour with Detail, with Paul Rogers on bass, and then one with Kent Carter. In 1989, a quartet tour to Norway was organized with Billy Bang. After Stevens’ death in 1994, the group continued as a trio with Carter until that point. Frode Gjerstad is also active in running Circulasione Totale Orchestra which is a group made up of young Norwegian musicians. They are focusing on electric instruments and rock-oriented rhythms. The band has been used by him to perform his own compositions and as a place to teach young people free improvisation. A 13-member band performed a commissioned piece at the Molde Festival 1989. It featured three horns and three drummers. The group also included a guitarist, an accordion, guitar, and a rapper. The Frode Gjerstad Trio includes William Parker, bass and Rashid Bakr drums. There is also the Circulasione Totale Orchestra featuring young Norwegian musicians. A quartet was completed by Hasse Puulsen, guitars and Nick Stephens, bass. Louis Moholo plays drums. Frode Gjerstad is a recipient of several grants from different foundations. He has also been active in the Norwegian Contemporary Music Federation committee as well as the Norwegian Jazzmusicians Federation. Circulasione Totale is his label. from www.efi.group.shef.ac.uk