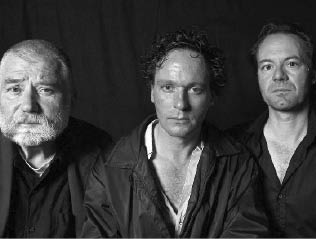 Full Blast, an aggressive and emotive-free jazz trio, is another of Peter Brotzmann’s recording and touring configurations. It features the dynamic rhythm section of Marino Pliakas (electric bass) and Michael Wertmuller (drums). Wertmuller, Brotzmann and Pliakas toured together for many years as a duo. They also worked frequently with each on festival gigs. The trio released a self-titled debut album in 2006 on German Jazzwerkstatt, and followed it up with Black Hole on Atavistic, which was released in 2009.