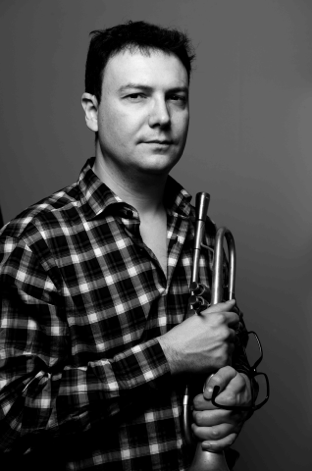 Fulvio Sigurta began playing the trumpet as a child and enrolled in the Conservatorio Luca Marenzio in Brescia at the age of 15. In 1998, he received his Diploma in Classical Trumpet. He moved to Boston in 2003 to receive a scholarship to the Berkley College of Music. In 2004, he earned a Diploma of Jazz at the Brescia Conservatory. In 2005, he was awarded a Masters with Distinction from the Guildhall School of Music and Drama. While he was based in London, his professional career began in 2004. He recorded with Cam Jazz on the very prestigious “Pure and Simple” project with John Taylor and The Guildhall Big Band. In the same month, he also joined the quartet of Gianni Coscia and Dino Piana, recording the album “Frescobaldi for noi”, which is a “jazz revisited version” of the music of Girolamo Frescobaldi’s renaissance period. These two projects were followed by many recordings in the studio with prestigious English and Italian collaborations over the years, including numerous recordings with Nostalgia 77, Giovanni Guidi’s Unknown Rebel band, Susaphonix, Andrea Lombardini, Lyria dancing group (Giulia Gussago), Paolo Damiani, Enzo Pietropaoli “Yatra” quartet, Mayra andrade, Cristina Zavalloni