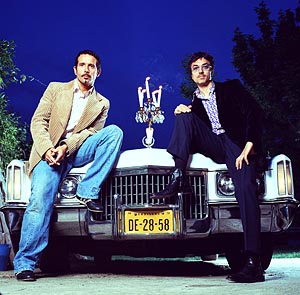 Gabin was founded in 2002 by Max Bottini, a musician and producer, and Filippo Clary, a DJ and producer. Gabin has evolved into a laboratory for constantly evolving ideas, sounds, and experiments. The self-titled first album was a huge success on international markets. It was also released in many other countries. The second album, “Mr. Freedom”, set a new record for an Italian album: Four tracks from the same album were synchronized in four movies including “Monster in Law” (starring Jane Fonda and Jennifer Lopez) and “The Fantastic 4” (starring Jane Fonda and Jane Fonda), as well as an amazing number of episodes on “Six Feet Under” or “Grey’s Anatomy”. Third and Double was the third album. It saw a fascinating change in sound direction that led to new horizons. There have been many connections, exchanges and discoveries along the way. Dee Dee Bridgewater, a Grammy- and Tony Award winner who has been featured on this show, sang “Into My Soul”, one of the most prominent voices in jazz. First, Mia Cooper, an outstanding performer and author of many lyrics; Flora Purim who was a star of Brazilian and international jazz music; the legendary Edwyn Collins, of “A girl just like you” fame; Z-Star, the Anglo Caribbean Zee Gachette (aka Z Star), who performed a soft roman dance like “City Song”, and Nadeah Miranda, a Nouvelle Vague blonde chanteuse; and finally, Chris Cornell, who eagerly committed himself to singing “Lies”, one of the album. Gabin released their first album “Gabin – The First Ten Years” in 2012. This collection has been licensed in Russia, CIS, South Korea, Turkey, Greece, Cyprus, Turkey, South Korea, Turkey, Bulgaria, Spain, South America and Israel. Ace of the Skunk Anansie, who performed a beautiful acoustic version of Lies with Chris Cornell singing, and Mozez (former front man of Zero7) for a new version of Keep It Cool, are also included in the list of collaborations. The most recent album “TAD/Replay” was released in Italy. It had an incredible impact on the market, reaching the #1 spot on the iTunes jazz album charts for three consecutive week. The synchronization of the Dreamworks animated film “Rise of the Guardians”, with the song “Bang To The Rock ‘n’ Roll”, was a major achievement at the end of 2012. This came after the release of “The First Ten Years” and the NBC TV series, “1600 PENN” in 2013. The film’s impact suggests a tendency to a melodic fresco, which has been evident since their original work. However, the instrumental tracks are the ones that really drive the album. This vision is realized with “Soundtrack System”, Gabin’s debut album. Zee Gachette is the only featured player. They are swept away by the sound and sink into an entirely new world where jazz, soul, and electronics blend in a unique way to create an innovative alchemy. Gabin’s music transcends national borders and attracts an audience looking for refined sounds and an appealing atmosphere. Several songs from their catalog have been used in international advertising campaigns. Among them is Polaroid (U.S.).