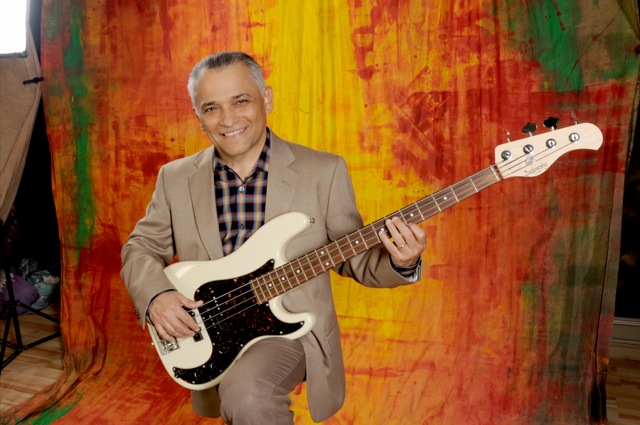 Gabriel Esinosa was a Mexican citizen who was born in Merida in 1952. At a young age, he discovered his love for music. At six years old, he started playing guitar with the support of his mother. Gabriel, his brother Victor, and Patricio were already playing the bass guitar in their band Los Deltons at fourteen. Gabriel graduated from Central College in Pella, IA in 1976 with a degree in music. After graduating from Central College in Pella, IA, Gabriel attended Berklee College of Music, Boston, MA. He received a degree as an arranger and was awarded the Magna Cum Laude award in 1983. His final year at Berklee Gabriel and George Robert formed the group Ashanti. He performed with Ashanti at many venues around Boston that year. He performed in Can Cun (MX) with Ashanti from 1984 to 1991. Gabriel graduated from the University of North Texas, Denton in 1992. He also received his Masters in Jazz Studies in 1995. Gabriel was also a member of the UNT Jazz Singers while he was studying at UNT. Gabriel also produced albums for Mexican artists, including Armando Manzanero. Gabriel returned to Central College, Pella, IA in 1996 as Director of Jazz Studies. He was the director of the jazz band, taught private music lessons and also created the Vocal Combos music programme which has been extremely successful. His return to Pella saw the return of Ashanti. Ashanti released three albums in the years following, including Sin Fronteras and En Fuego. He also toured extensively throughout the Midwest and Mexico. Ashanti has hosted many musicians, including Anat Cohen and Gil Goldstein, as well as Dave Samuels. Gabriel celebrated 40 years of music in January 2008. Gabriel presented his band Ashanti Mundo to the Teatro Jose Peon Contreras, Merida (Mexico) on January 7, 2008. Berklee alumni and good friends George Robert and Ashanti Mundo were present at the Teatro Jose Peon Contreras in his native Merida, MX. Gabriel presented a concert in August 2008 with the Doctors in Jazz in Avigliana in Italy. It featured George Robert on sax and Francis Coletta on guitar. Maria Rusca played piano, Riccardo Fifavanti played bass, and Sangoma Eveett played drums. Gabriel was a guest vocal instructor at the Due Laghi Jazz Workshop, Avigliana (Italy) from August 31 through September 3. Gabriel’s first solo album was recorded in New York City in November 2008. The album includes compositions by Gabriel Espinosa, Alison Wedding, and the talents collaborations of Antonio Sanchez and Claudio Roditi. Gabriel performed the music from From Yucatan To Rio CD at the Iowa City Jazz Festival in July 2010. He was joined by Adriano Santos (Helio Alves), Alison Wedding, Jim Snidero and Paul Meyers. Gabriel and Hendrik Moeurkens recorded a CD entitled Celebrando in May 2011 with Anat Cohen and Misha Tsiganov. The CD will be released April of 2012. http://www.gabrielespinosamusic.com