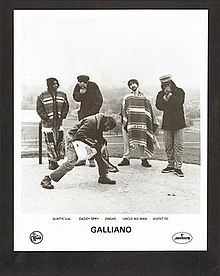 Galliano, a London-based acid jazz band, was founded in 1988. This group was the first to sign to Eddie Piller’s Acid Jazz Records. Rob Gallagher (vocals), Constatine Wiir (vocals) and Crispin Robinson(percussion) were the original members. Valerie Etienne was also an important member of the original group, singing along with Constatine Weir (vocals) and Rob Gallagher (percussion). Galliano reached its peak success with “The Plot Thickens” in 1992. This major work combines the jazz harmonies with urban soul, such as “Twyford Down” with its many changes of tempo or “Travels on the road” and even “Long time ago”. As of 2005/2006, Rob Gallagher is still performing as Earl Zinger as well as as a member of Two Banks of Four. Text contributed by users is available under Creative Commons By–SA License. It may also be available under GNU FDL.