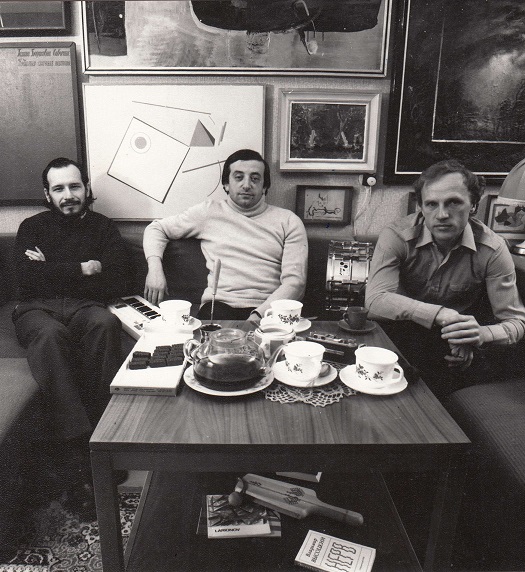 Jazz trio combining Russian soul with the influence of Sunny Murray, Albert Ayler, Art Ensemble of Chicago etc, formed in Vilnius, (then) Soviet Lithuania c 1971 by Vyacheslav Ganelin (b 17 December 1944, Kraskovo), piano, composer; also percussion, electric guitar etc; Vladimir Chekasin (b 24 February 1947, Sverdlovsk) on reeds, drummer Vladimir Tarasov (b 29 June 1947, Archangelsk), all multi-instrumentalists. Soviet jazz was, understandably, derivative until the avant-garde movement started in the 1970s. The artists create the structures and are not required be classified. This is why jazz (or better, free improvisation) has finally become an international language. The Ganelin Trio was often overlooked by Western critics and audiences. However, their music is not to be overlooked. There was an American East Wind label that issued half a dozen albums featuring Soviet artists (see below). Russian and Soviet artists in any genre have always linked their art to other areas: Tarasov is an architect, Ganelin is a composer, Tarasov studies painting, sculpture, and architecture, Tarasov plays with symphony orchestras, and all are familiarized with ethnic (or ‘third world’), musical forms. Each year they compose a large suite. ‘We borrow elements from jazz, chamber music, folk music, and other genres.’ Chekasin says. Ganelin says that the main quality of their work is the lack of rational, ”dry” elements. Our music is organic and natural. The audience can sense that there is no pretence. First LP Con Anima ’77 was recorded on Melodiya. Next came Concerto Grosso ’80, Poi Segue ’81 and Semplice ’83. All four of these recordings were later released on Sonore CDs. Non Troppo (an uninspired performance) was recorded on Enja, a two-disc version on hat Art. There were also fragments on samplers (Poco A Poco and Katalog on Amiga), and Vyacheslav Ganelin Trio (Poljazz). All other records were on the legendary Leo label in London. Melodiya issued Opus A Duo’82 from Vilnius without Chekasin who was also involved in other projects. It was later also released on Sonore. Leo released Chekasin’s solo Exercises, quartet Nostalgia (perhaps spoilt by a rock/disco strapjacket), and big band New Vitality. Kevin Whitehead wrote about the trio’s Con Affetto, which was recorded in Moscow in 1983 and released on Leo in 1986. Inverso ’84 was recorded by Ganelin programming drum machine, with Pyatras Viyshniauskas playing alto and soprano sax, and Grigory Talas playing electric bass. All three of them then happily ignore. Ganelin immigrated to Israel in ’87. There, the Jerusalem February Cantabile was recorded ’89 by Victor Fonarev with Mika Markovich. Vyshniauskas played reeds, and Klaus Kugel played drums. Frederick Starr’s Red is a recommended book.