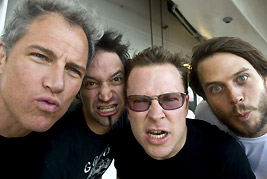 Garage a Trois was originally an improvised session. It grew from sessions Stanton Moore’s All Kooked Out! Album in 1999. Although the lineup was the same for both projects — Charlie Hunter on the eight-string guitar, Moore on the drums and Skerik on the sax — the sound was very different. All Kooked Out! had a funky sound, but Mysteryfunk, the first Garage a Triis recording, was more dark and atmospheric. Mysteryfunk, which was only released on vinyl, seemed to be the last Garage a Trois record. But four years later Garage a Trois returned, with Mike Dillon as a percussionist and Skerik as a saxophonist. The result was Emphasizer, which meant that Garage a Trois would continue to exist despite all the hectic schedules. Outre Mer, the soundtrack to the French film of that name, was the next project in 2005. Four years later, Power Patriot was released in 2009, with Marco Benevento substituting for Charlie Hunter. For 2011’s Always Be Happily, But Stay Evil, this lineup was still intact. Allmusic