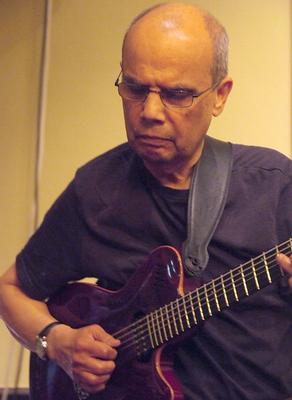 b. Born 24 November 1941 in Patna (India). Boyle, who learned to play guitar in childhood, attended Leeds College of Music in northern England in the 1960s. The folk rock band Eclection was then formed. His first major engagement was with Dusty Springfield in the mid-60s. Then he went on concert tours in the UK, Europe, and USA and sometimes recorded as a backing artist for artists like Brian Auger or Julie Driscoll. He was a session musician based in London during the 1970s. He appeared on many albums, as well as appearing on television and film scores. He also composed jingles. He recorded with many artists during this time, including Bert Jansch and Keith Tippett as well as Stomu Yamash’ta, Norma Winstone, Mike Westbrook and Mike Westbrook. For a Ronnie Scott’s gig, he also supported Eddie Harris as saxophonist. Boyle, despite all of this, was determined to start his own band. In 1973, he founded Isotope, with Jeff Clyne (bass), Brian Miller on keyboards, and Nigel Norris on drums. There were many albums and tours throughout the two-year existence of this jazz fusion group. Boyle, who was now a solo artist in the late 70s won the Melody Maker Poll New Star Award and his first solo album, The Dancer won the Pop/Jazz Award from the Montreux International Jazz Festival. Boyle spent the early 1980s in Denmark as a resident artist, recording additional albums. He returned to the UK and formed Triple Echo, which featured the Roland Guitar Synthesizer. He was also deeply involved in education, and taught at many establishments in the north west, including Wigan.