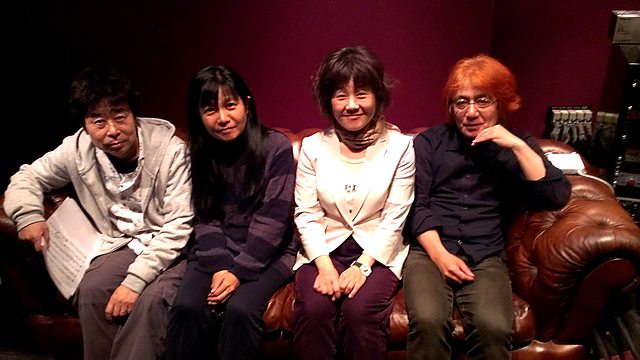 Natsuki Yamamoto – trumpet Satoko Fujii, accordion Kazuhiko Tsumura, guitar Norikatsu Koreyasu, and bass Natsuki Takura’s captivating Spanish-inflected quartet are a treat of musical blending and inventive musicianship. Although the quartet plays all over Tokyo, the Otoya Kintoki is their home base. This intimate space suits the music both sonically and acoustically perfectly. You will want to hear this quartet up close. Although the club isn’t small, there is an intimacy that allows you to feel the music’s delicate, beautiful immediacy. Gato Libre is a Spanish name that roughly translates to “free cat” and they play new tunes each evening, composed by leader Tamura. They don’t have any real titles so Tamura calls them “Ma,” Tamura says “Mi,” Ya,” “Sa,” and “Su”, which gives them an abstract and undefined quality. Once the tunes are collected, recorded, and prepared for their next CD, they will most likely be titled. However, they can be enjoyed without any poetic allusion during the January show. One could sink into their sonic beauty or directional intrigue directly. This quarter is about beautiful layers of complexity. The opening tune, “Ma”, was slow, beautiful, and calm. Tamura’s trumpet played the melodies, while solos fell like tissues on the wind. His notes feel like they are inside each other, and he plays them with a relaxed, sophisticated style. The second tune, “Mi”, had a stronger melody. Everyone began to play stronger solos. They had more Latin influence, and were more flamenco and Spanish classical inspired than jazz. The third song, “Me”, was an Arabic-inspired tune that was as pulsing and throbbing as any other in the evening. All four members of the quartet worked together closely, and each member fell in love with the music more and more. The oddly metered and differently-lengthened lines of tunes like “Ya,” were intriguing. Tsumura’s guitar and his foot tapping are impressive. The flow kept everyone else focused, and Tsumura’s guitar (and his foot stomps, too!) allowed Koreyasu to take more aching solos with pauses and a relaxed time-feel. The music was as powerful as its notes, with all of its hesitations and open spaces. Tamura’s trumpet playing is strong and sure-fingered, but there are plenty of unforced spaces that allow the feelings to flow. Each note is presented with precision and poise. This lack of clutter allows for emotions, moods, and sentiments to be reflected in the overall sound. It is quiet, which makes it easy to hear the brilliance of solos that are freely and openly played. The fluid playing of well-constructed songs is a different experience than Fujii and Tamura’s more wild style. This music is reflective, calm and deeply felt. All of it will be collected on the fourth album, which will be released once the songs have been titled. from http://jazzinjapan.com