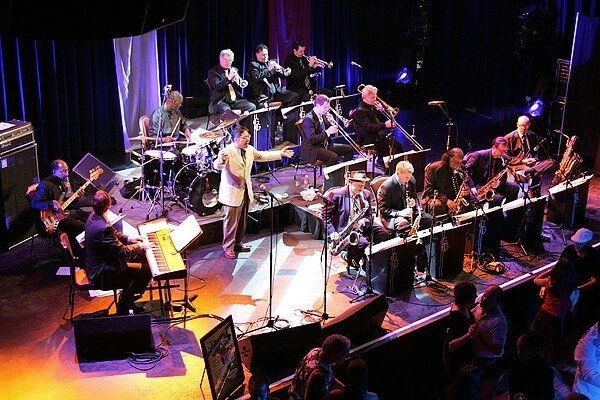 George Gee, the bandleader believes that big-band music is an American original art form that will continue to evolve. The George Gee Jazz Orchestra sound is firmly rooted in the swing era. However, it is not an exact re-creation. This band is an artistic living entity. His musicians and he pay tribute to the traditional big band sound while still adding their own personal touches to the music. Even the most familiar arrangements like “Take the A Train” or “All the Cats Join In” get a modern, swing-inspired feel. The GGJO is able to seamlessly bridge the gap between swing, bebop, and modern eras. This fusion is evident in the recording “John Dokes sings, George Gee swings”, which features frequent collaborator, vocalist John Dokes. It creates a “danceable” bebop flavor. This collection’s theme is “Basie Bird and Bacharach”, which pays tribute to jazz/pop legends and creates an unlikely musical alliance. George spent many decades performing at festivals and nightclubs, as well as the great works by the masters. George is influenced by Art Blakely, Dizzy Gillespie and Count Basie. Basie alumni, as well as other jazz icons, such as Clark Terry, Dr. Billy Taylor and Joe Williams, have formed close friendships with him. Frank Foster, a great influence on George’s and the George Gee Jazz sound, was also a major. The result of this relationship was “Setting the Pace,” a collaborative album that reached the Top 50 on the national jazz charts. This experience allowed the band to grow tremendously and they now specialize in original jazz compositions and performance arrangements. Music Director Dave Gibson is the trombonist. Learn more about GGJO’s original compositions. Gibson is an alumnus of many illustrious ensembles, including the Dizzy Gillespie Alumni All-Star Big Band, NEA jazz Master Slide Hampton’s World of Trombones, and as a featured trombonist/arranger with young jazz lion Roy Hargrove’s Big Band. He says, first and foremost, when composing music for the George Gee Jazz Orchestra: “It’s got to be swingin ‘…..” visceral. Jazz is spontaneous creation within the swing. The swing is the way I frame the composition from beginning to end: rhythmic approach and pacing, length, story.” While jazz concerts and festivals are more suited for musicians who have more time to display their virtuosity than those playing to a crowd of lindy-hoppers, who like songs that are shorter, audiences at jazz concerts or festivals enjoy the longer performances by soloists of the George Gee Jazz Orchestra. Learn more about the musicians. A jazz show has more space for solos than when it’s performed for dancers. George states that we can let the cats blow more. The audience is encouraged to shout and feel the music right along with the band. from http://www.georgegee.com