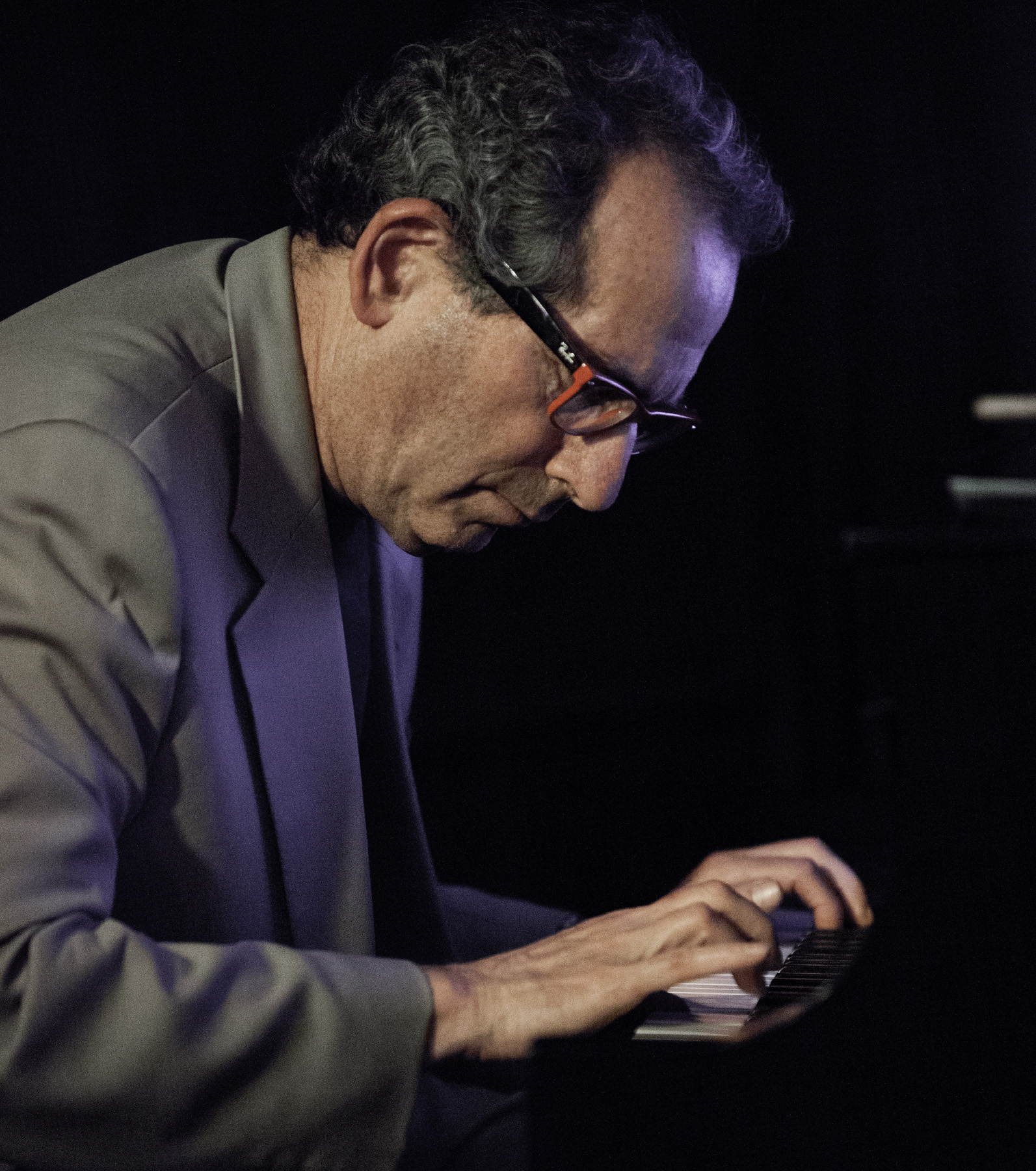 George Kahn, pianist and composer, has been a major figure in Los Angeles’ jazz scene since the late 1990s. He recently released his sixth CD, “Cover Up!” Cover Up! was released by George Kahn’s Playing Records label. Kahn’s trio includes bassist Brian Bromberg, drummer Alex Acuna and occasional guests. This brilliant group of musicians interprets four popular originals, as well as some familiar and easily recognizable rock songs that are made into jazz. George Kahn says that people respond to songs they recognize. “Thinking about this, I realized that I had always wanted to create jazz versions for tunes one doesn’t hear in a jazz setting. Instead of performing ‘Stella By Starlight” or ‘Autumn Leaves, I decided it would be more fun to play songs I loved growing up, mostly from the late 1960s, early ’70s, and some newer tunes. I settled on songs from Cream, Pink Floyd and Bill Withers, along with John Mayer.” Kahn created arrangements that reimagined pop songs to be swinging and hip-jazz. Although ‘Sunshine Of Your Love was initially difficult, I found it to be very easy when I tried it out in the studio with Alex Acuna and Brian Bromberg. Comfortably Numb has an interesting and open chord progression which allows it to work well as a ballad. “Waiting On The World To Change” was my first encounter with the song. I fell in love with it and discovered that it was a gospel song, even though John Mayer doesn’t play it that way. We slowed it up, added some chord changes, and there it was.” Another unusual feature is the merging of Jerome Kern’s “Yesterdays” and Beatles “Yesterdays”. This allows listeners to be unsure which song is which. George Kahn George Kahn is an occasional player with Alex Acuna and Brian Bromberg. They formed the core of his previous CD “…Compared to What.” There is clearly a strong bond between them all. They were the first people I thought of when I was thinking about making a new album. They are great musicians and I enjoy playing with them. Bill Withers’ “Use Me,” features Courtney Lemmon, a young singer. My wife is a vocal teacher, and Courtney was one her students at Santa Monica High School eight years ago. She was also our babysitter once upon a time, and she had a great voice. She sang a song on my last CD, studied at The New School in New York, returned to Los Angeles a year ago, so it was an easy choice to be featured on Bill Withers’ song. George Kahn was born in New Rochelle in New York and began studying classical music when he was nine years old. As a Brandeis University Composition Major, he began to compose while in high school. He was also interested in improvisational music and studied the music of John Cage, Charles Ives and Karlheinz stockhausen. Although he was particularly influenced by John Coltrane’s Kulu Se Mama and other jazz music, he didn’t start exploring jazz until his final years at Brandeis. After graduation, he moved to California in 1976. He lived on Cape Cod for several years and did some gigs there. “I decided it was time to stop calling myself a musician and be one.” Kahn was an improvising New Age performer, studied arranging with Spud Murphy and performed in many settings. He formed the Playing Music label in the second half of 1990 and Sudhana Music Publishing. Six CDs have been released since then. Each of my albums has a variety of styles that are linked together by my playing and compositional style. My debut album Out of Time was my first. I wanted to go big and find my dream drummer, Billy Higgins. I convinced him to work on the project and he suggested Richard Reid as a bassist. After I got Billy, everything fell into place. Surprised to discover that he didn’t know how to read music, I was shocked. He was able to identify every song by the second time he tried. He was a man with the most amazing ears. Freedom Vessel features Kahn as a trio with Joe LaBarbera (bassist) and Joe LaBarbera (drummer). There are also guest spots for Bobby Rodriguez and Eric Marienthal, altoist and bassist. The pianist’s originals are the main focus. Midnight Brew features Kahn’s original working trio (with drummer M.B. and bassist Karl Vincent). Gordy is the core of stars such as Marienthal and Justo Almario as well as guitarist Larry Koonse and trumpeter Bobby Rodriguez. The Kahn/Bromberg/Acuna trio is featured on…Compared to What? for the first time, with Almario, Marienthal and John Fumo as well as guitarist Ira Ingber. The pianist says, “Naturally, I like to think each CD is stronger than its predecessor.” It’s like building blocks. Each new project builds on the one that came before. Keith Jarrett is known for his focus on not playing riffs or phrases constantly, but instead focusing on fluid improvisation. “That is my goal in my playing.” George Kahn performs regularly in Los Angeles, including an annual Jazz For The Homeless fundraiser, benefitting the charity People Assisting The Homeless (People Assisting The Homeless), and benefits for public schools music programs. He looks forward to returning to the road in the near future. My main goal is to share my music as widely as possible. There is so much life in West Coast Jazz. It’s viable and has the potential to grow. I deliberately selected songs that may appeal to John Mayer fans who have never heard jazz albums. They might also be interested in this CD because they are familiar with some of the songs. Cover Up! Cover Up! will open up more doors to this amazing music.” “Cover Up!” George Kahn’s best recording yet, it contains music that is hard to resist.