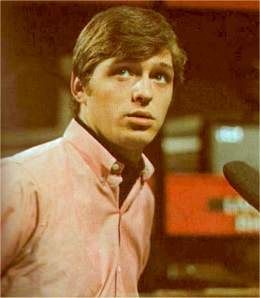 Georgie Fame, born June 26, 1943, is a British rhythm andblues and jazz singer and keyboard player. His real name is Clive Powell. Fame was born in Leigh, Lancashire. He was sixteen years old when he signed a management agreement to Larry Parnes. This gave artists new names like Marty Wilde or Billy Fury. Fame was already playing the piano for Billy Fury with The Blue Flames, a backing band that later became “Georgie Fame” and “The Blue Flames”. They were a great success with rhythm and Blues. Their biggest hit was “The Ballad of Bonnie and Clyde”, which reached number one in both the United Kingdom and the United States. They also had number-one UK hits with “Yeh Yeh”, (1965), and “Get Away”, (1966). His singles chart success continued into the 60s. However, chart statistics revealed that his three Top 10 hits were all number one. Fame continued to play into the 1970s. He had a hit in 1971 with Alan Price, ex-keyboard player for The Animals, “Rosetta”. With his friend Bill Wyman as bass, he has also toured with the Rhythm Kings. He was a key member of Van Morrison’s band from the 1980s to the 1997 album The Healing Game. He also served as his musical producer. While still recording and touring as an independent artist, he played keyboards and sang harmony vocals on songs like “In The Days Before Rock ‘n Roll”. He often plays residency at jazz clubs like Ronnie Scott’s. Starclub’s album also featured him as an organist. Georgie Fame’s jazzy, convincing blend of American R and jazz is surprisingly convincing.