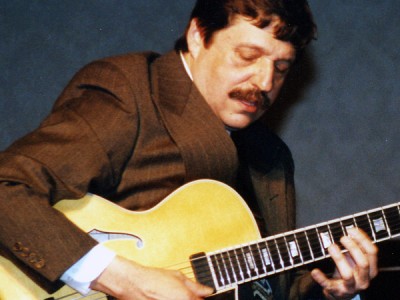 Gerry Beaudoin, a jazz guitarist, has made a name for himself as an arranger, leader and guitarist. Gerry Beaudoin has been called “One of New England’s top jazz guitarists” by Just Jazz Guitar Magazine. He has appeared on more than twenty recordings during his career, since 1990’s first national release. His award-winning group, the Boston Jazz Ensemble, which featured percussion legend Alan Dawson on vibes and drums, and alto saxophonist Fred Lipsius, from the seminal jazz-rock band Blood Sweat and Tears. Dick Johnson, who plays clarinet in the Artie Shaw Band, received rave reviews and critical acclaim. from http://benedettoguitars.com