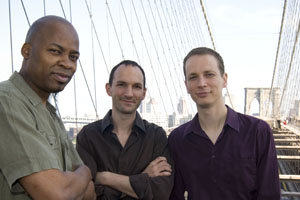 Although they are from different parts of the world, Gilfema gives the impression that singer/guitarist Lionel Loueke, Hungarian drummer Ferenc Nmeth and Swedish-Italian Bassist Massimo Biolcati were meant to meet. Gilfema released only two albums, their self-titled 2005 debut album and their 2008 release Gilfema 2 featuring the trio and guest clarinetists Anat Chen and John Ellis. Yet their recordings reflect a feeling of intuition that is more common in decades of playing together. All three members have been extremely busy since 2005’s group’s debut album. Both Biolcati and Nemeth have released their debut albums as leaders. Loueke, on the other hand, has released three solo albums, including Virgin Forest. This ObliqSound album features Herbie Hancock and Cyro Baptista along with Gregoire Maret, Gretchen Parlato and Gregoire Maret. All three were also featured on Loueke’s major label debut on Blue Note called Karibu. All of Gilfema have toured with some of jazz’s biggest names, including Loueke’s star-making performances with Charlie Haden, Terence Blanchard, and as a touring member in Herbie Hancock’s band. Named Gilfema after Lionel GILles Loueke, FErenc Nemeth, and MAssimo Biolcati, the group’s name is meant to highlight the collaborative nature of the music produced under this moniker. Over a tributary of jazz, the sound of three vibrant cultures seamlessly weaves together to create a powerful musical experience. from http://www.obliqsound.com