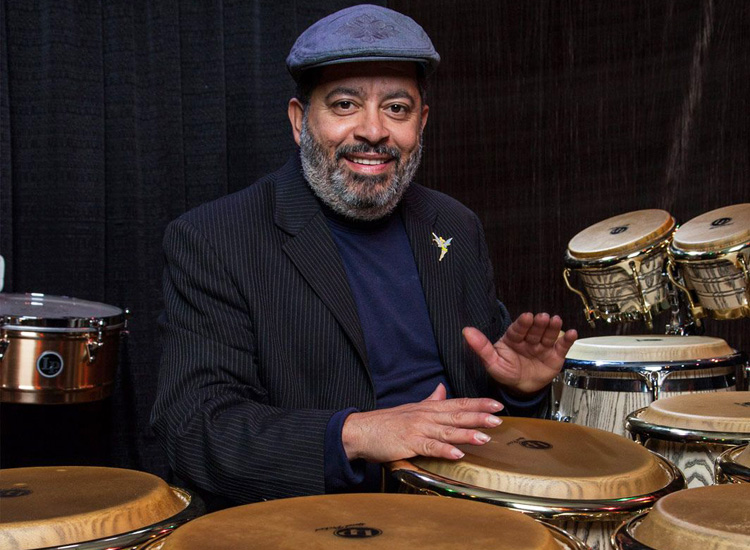 Giovanni Hidalgo (born March 9, 1963, in San Juan, Puerto Rico) – percussionist. Giovanni received his primary education in San Juan, the capital of Puerto Rico. His father and grandfather had been musicians and he was raised in a household surrounded by drums, bongos, congas and timbales. When he was eight he received a conga for his birthday which had been hand made by his father. As a young child he practiced and developed his speed and playing skills on the conga and on the other instruments in his house. He would drum a tune with sticks and then play the same tune with his hands. Giovanni’s break came when he auditioned and was hired by the Batacumbele Band in 1980. In 1981, he traveled with the band to Cuba where he met a musician by the name of Changuito. Together they were able to create a unique style of rhythm and ushered in a new musical era in latin music. In 1985, Giovanni was performing with Eddie Palmieri at the Village Gate in New York, when the legendary jazz musician Dizzy Gillespie walked in and listened to Giovanni play. So impressed was he with Giovanni, that he told him that someday in the future they must get together and play – this happened in 1988 when Giovanni joined the Dizzy Gillespie United Nations Jazz Orchestra. In 1992, he released his first album titled “Villa Hidalgo” and that same year he was hired as an adjunct professor at the Berklee College of Music in Boston. There he taught all types of rhythms, Puerto Rican, Cuban, Dominican, reggae, African and jazz. He believed that every country has their own musical style and his objective was to capture the musical essence of these. He held this academic position until 1996, when he decided to continue performing on tours. Among the musicians with which Giovanni has either performed or recorded with are: * Dizzy Gillespie, * Charlie Palmieri, * Eddie Palmieri, * Jack Bruce, * Paul Simon, * Art Blakey. In 2001, he recorded “Jazz Descargas” with the Conga Kings. His most current project is a DVD titled “Traveling Through Time”. User-contributed text is available under the Creative Commons By-SA License and may also be available under the GNU FDL.