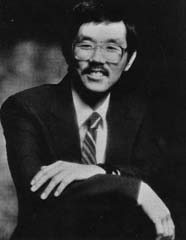 Chicago native Glenn Horiuchi seems to have been destined for a life of music, as he grew up singing and hearing Japanese folk songs. His grandfather, Saburo Sugita, who not only was one of the first Japanese-Americans to be heard playing music on the radio (he was known for his Shakuhachi or Japanese flute playing), he also composed a song about life in the US concentration camps during World War II. It was this weaving of music and politics which would color almost all of his compositions. It seemed that he didn’t do much of anything in moderation.At times he was an auto mechanic, a graduate student of mathematics, construction worker, multi-instrumentalist (guitar, piano and Shamisen) and a music teacher. Later in his life, he studied Zen. Near the end of his life, he said that he asked himself why he had to go full bore at everything he did. I found evidence of this when we got into a small argument about the history of Jazz; this argument would have been insignificant had he not been in the last months of his life, resting from his last concert! It was his dogged determination as a political activist that he made his greatest impression. The concentration camps of Germany are notorious and well known, however, it was only in recent memory that the camps in the United States were discussed on a national level. 1976 saw the release of the television film, “Farewell to Manazanar”, which was written by a survivor. There were ten concentration camps in the United States, which interred some 110,000 Japanese-Americans. Horiuchi remembered this injustice on the Issei, which is the first generation Japanese-Americans (JA) and he helped to organize the Commission on Wartime Relocation and Internment of Civilians, which eventually led to the Redress and Reparations Act. In 1987, Horiuchi met Edna Ikeda, who was the love of his life. She is a teacher, activist and photographer who was credited on every album that he made, whether it be in the dedication or for her outstanding photography. They were married and settled in San Diego. They continued their activism and Horiuchi became more deeply involved with his music. He had played Rock guitar before, but he concentrated on piano and Jazz, infusing his work with Japanese song and rhythms and abstract touches. San Diego, not known for it’s receptive and diverse musical atmosphere made it hard for him to find gigs, although there were grants that allowed him to complete his septet work, “Poston Sonata,” after the concentration camp in Arizona. Horiuchi’s first group consisted of M’Chaka Uba, a bassist who was one of the founding members of the Association for the Advancement of Creative Music, which was responsible for the birth of the acclaimed Art Ensemble of Chicago and drummer Leon Alexander. Alternating with Taiji Miygawa on bass, they recorded Horiuchi’s first five albums on Jon Jang’s AsianImprov records. He eventually moved to Los Angeles, which provided more venues for his work to be heard and he formed a quartet, Francis Wong, tenor sax, Anders Swanson, bass and Jeanette Wrate on drums. His musical palette, already a colorful one, grew even larger and his compositions more ambitious, incorporating large ensembles. One of the most important developments in his musical life was his taking up the Shamisen (a three-stringed Japanese instrument that looks like a banjo), which brought even more of his heritage to his music, as well as his studies of Nagauta and Zen. 1999 was the year that he was diagnosed with colon cancer. He had been rather prolific, but a cough that wouldn’t go away had been misdiagnosed, so it had spread beyond the operable stage when he underwent treatment. 2000 saw his last concert, organized by his wife and friends where he played wonderfully (see review below). He eventually went off chemotherapy, since he rationalized that the chemicals were not making him feel better and he knew his condition was worsening. Glenn Horiuchi passed away at home on June 3, 2000. He is survived by his wife and son. His work both musical and political will live well into the future. from http://www.furious.com/perfect/glennhoriuchi.html