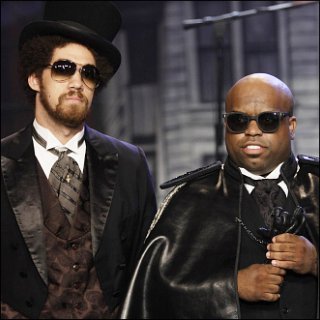 Cee Lo Green and Danger Mouse created a ground-breaking partnership that lit up charts with their psychedelic visions of hip hop, soul and funk. Although the Gnarls Barkley-Dangerous Mouse collaboration didn’t take Danger Mouse to number one on the British charts, it was his first attempt at being the pilot for a hit record. Born Brian Burton, Mouse was first heard by discerning listeners when he created The Grey Album. This bootleg combined Jay-Z’s vocals with samples from The White Album by EMI, the Beatles. The label issued a cease and desist order but Damon Albarn, a Blur and Gorillaz employee, was impressed and hired Burton to produce the beats for Demon Days, their second album. One year later, Danger Mouse was back on the charts with Gnarls Barkley (a collaboration project with Cee-Lo Green, a solo artist who was formerly a member of Atlanta’s Goodie Mob). They had met in Atlanta in late ’90s and started recording together at the same time as a 2003 DM album titled Ghetto Pop Life. A few recordings were shared and played by many who knew the couple. “Crazy”, one of the leaked tracks became a popular download. The single, “Crazy,” became the first to reach the top of British charts via digital distribution. The resulting album, St. Elsewhere peaked at number 1 on the album charts. It was soon followed by The Odd Couple in 2008.