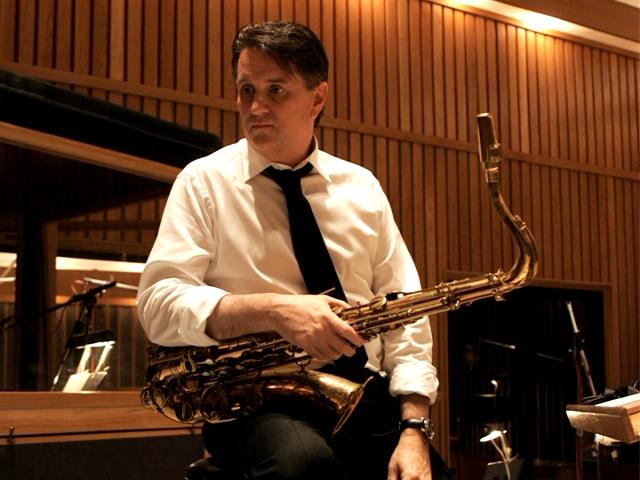 Gordon Goodwin’s Big Phat Band is an 18-piece jazz band that celebrates the best of big band tradition while presenting a modern and unique sound. SRO audiences have been able to enjoy one of L.A.’s most skilled, hard-swinging large jazz ensembles thanks to Gordon Goodwin’s writing talent. The listener is taken on a musical journey by Gordon’s clever and insightful arrangements. They are treated to a variety of styles, including latin, blues and swing, as well as classical and hard-hitting jazz. There is even an homage for Looney Tunes! Gordon Goodwin is a three time Emmy Award winner and a five-time Grammy nominee. He was recently awarded a 48th Annual Grammy award for Best Instrumental arrangement for his arrangement of “The Incredits,” from Pixar’s film “The Incredibles.” Gordon Goodwin’s Big Phat Band performed at the Playboy Jazz Festival in June 2005. The Big Phat Band’s debut on national television was on NBC’s “The Other Half,” hosted Dick Clark. “Swingin’ for the Fences” was awarded a prominent spot on Air Force One’s entertainment system. For its numerous appearances in Los Angeles and nationally, the Big Phat Band has received excellent critical reviews. The Big Phat Band has recorded and performed with many of the most prominent names in the entertainment business, including Madonna and Celine Dion, Billy Joel and Quincy Jones, Diana Krall and Johnny Mathis, Ray Charles and Paul McCartney, Toni Braxton and Supertramp. The Big Phat Band has produced many jazz soloists and recording artists, such as Eric Marienthal and Wayne Bergeron, who were also nominated for a Grammy. Text contributed by users is available under Creative Commons By–SA License. It may also be available under GNU FDL.