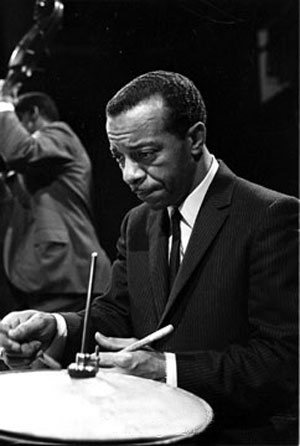 Grady Tate was born January 14, 1932 in Durham (North Carolina) and is a hard-bop and soul-jazz musician and singer. He has performed with Lena Horne and Ella Fitzgerald, Miles Davis and Blossom Dearie as well as Chris Connor, Sarah Vaughan (Ray Charles, Cal Tjader), Peggy Lee, Bill Evans and Duke Ellington. Biography Tate was born in New York City and became a drummer for Quincy Jones’ band in 1963. Grady Tate’s drumming was instrumental in defining a certain hard bop, soul jazz, and organ trio sound in the 1960’s and beyond. His rich, complex, and intense sound is immediately recognizable by his understated style. He combines subtle nuances with crisp, “on top” timing. This is in contrast to playing slightly before or after the beat. On the classic Jimmy Smith and Wes Montgomery albums, the Grady Tate sound is prominent. Grady Tate was The Tonight Show Starring Johnny Carson’s drummer for six years. Grady Tate is a popular sideman for accomplished musicians due to his exceptional intuitiveness and ability make any type of music swing with taste. His interpretation of many genres of music allows him to create his own style of jazz grooves, including Latin jazz, reggae, rock jazz, funk, and so on. Jimmy Smith’s 1986 album Go For Whatcha Know (with a track by Grady Tate) is an example of Mr. Tate’s ability to master multiple musical styles. Stan Getz’s Sweet Rain (1967) is a great example of his incredible drumming skills. His most well-known vocal performances include “I Got Six” (part of the Schoolhouse Rock series) and “Naughty Nine” (part of Multiplication Rock). He has many albums as a singer and has a beautiful baritone voice. Since 1989, he has been a Howard University faculty member. He released two albums, TNT and BODY, for Milestone Records in 1991 and 1992.