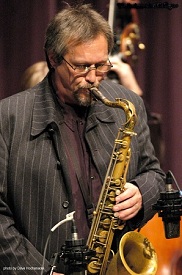 GUNNAR MOOSSBLAD is a saxophonist and composer/arranger. He also teaches in the American jazz idioms. He holds a B.M. He holds a B.M. in Jazz Studies and a M.M. In Jazz Studies and an M.M. Gunnar gives concerts and clinics around the globe. He has recorded and collaborated with many jazz and classical musicians, including Jon Hendricks, David Liebman, Jimmy Cobb, Marv Stam, Mickey Roker, Cecil Payne, Jim Ridl, Chris Hanning, Royce Campbell, John D’earth, Hod Olbrien, Mel Torme, John Coates, Jr., Claude Black, John Coates, Jr., Claude Black, Gunther Schuller, John Harbison, Avnor Doman, and many other. He is also the musical director and member the internationally acclaimed David Liebman Band, as well as the Manhattan Saxophone Ensemble. Gunnar composes music when he’s not performing. He has composed music for many musical situations and his music is published by Houston Publishing and Le Moine Music. He contributes regularly to the Saxophone Journal magazine. You can hear his compositions and playing on several critically acclaimed recordings, including The Seasons Reflected (Soul Note 120345-2), the David Liebman Big band on the Grammy Nominated album Beyond The Line (Omnitone-12204), and the mph trio on Curves. (GPC-CD1024) and The Manhattan Saxophone Ensemble (GPC-1023). His many honors and grants include a 2007 Pennsylvania Council for the Arts Fellowship Award for outstanding artistry. His most recent album, The Dave Liebman Big Band…As Ever (MAMA Records MAA-1039), is getting outstanding reviews. Gunnar is a saxophone clinician at the SELMER Company in Elkhart, Indiana. http://www.utoledo.edu