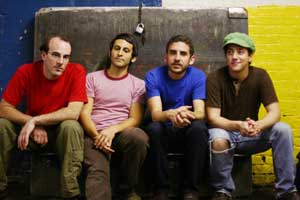 Gutbucket is an open-air band. The New York-based seven-year-old quartet, Gutbucket, is equally at home playing in front of 900 sweaty, pogo-ing teenager skate-punks, a group of stoned jamband freaks or on an anarchist German collective houseboat. But, most importantly, their music fits in. The group can switch between hard rock, Latin, thrash, and klezmer in a matter of seconds. Despite having a jazz background, they are able to move from one genre to the next with ease. Ken Thomson, saxophonist, says that “we’re all pretty serious” about rock. He adds, “And not just a token throwing in some other tunes.” It is a part of who we are as individuals. We’ve all had training in jazz, but we’ve moved outside that world into the rock world, to try to actually bring something new to that.” Though the band might seem rooted in the genre exploding of avant-squonk (their 2001 debut, InsomniacsDream, was released on the Knitting Factory house imprint), their shift to louder sounds began with their controversially-titled Dry Humping the American Dream (released in 2003 in Europe on the legendary Enja label and in 2004 in the US on Bang on a Can’s acclaimed Cantaloupe label). It was a much easier move than you might think. Eric Rockwin, the bass player claims to have memorized every Paul McCartney tune before his father gave him a Ray Brown CD. Ty Citerman, guitarist, was “into everything Hendrix, Van Halen, and Led Zeppelin.” Paul Chuffo, drummer learned how to play by imitating Keith Moon from The Who. It is fitting that the band formed in 1999 after Ty, Ken and Paul sought to broaden their musical horizons at Columbia University. Paul was the “crazy guy” in the corner, smoking cigarettes and writing papers. After four years of playing in the soul-jazz Ex Caminos, they split in 1999 to create Gutbucket. The band was formed when Eric and Paul were introduced by a friend. They debuted at Manhattan’s Baby Jupiter four months later. Gutbucket began to build their live reputation, first performing in Manhattan and then expanding into the college markets on the east coast. Dry Humping the American Dream was released and Gutbucket’s full-scale US rock club/art gallery/bar tour introduced them to their “favorite places”, San Francisco, Santa Fe and Hattiesburg (MS), and Wichita (KS). The band also played at the US festival circuit, including Seattle’s Earshot Jazz Festival and New York’s Winter Jazz Festival. They also visited the colleges of Brandeis and Colgate, U. Missouri, as well as the U. Missouri State University. The band proudly referred to this US effort as a continuation of what was * beginning with InsomniacsDream, their primary tour outlet * Europe. They continued their love affair in the region through a German manager. The band performed in 16 countries across Europe over the course of ten tours. Ty says that they are jazz musicians over there, referring to the beautiful trips. “Over there we stay in hotels and get food. There is something we love about it. There is art. Gutbucket doesn’t know what they are. They have been involved in many projects over the past seven years. Many of these are more like the art-rock stage antics or Phish than the somber-minded blowings of the downtown atonalists. Their shows are legendaryly chaotic (“Keep all limbs and children clear of Ken Thomson’s manic sax,” Time Out New York advised. However, they are events in themselves. The band often performs its scores to classic cartoons for special gigs, such as the Superman Vs. The Mechanical Monsters (1941), and the French animation Johnny the Giant Killer (50). Eric explains, “It’s about little children who go searching for the giant they read about in fairy tales.” Ty joins the fray, “It transforms into this revolutionary theme where they join hands with a group of bees to take over the giant’s castle” * Paul continues, “after fighting off an wasp coup d’etat.” Eric concludes, “After that Johnny suppresses her sexual attraction to Queen Bee and fends away the jealous bee guards.” Ethel, Bang on a Can’s family friend, has been involved in special collaborations. Blindfolds have been used; there have also been volleyball games and blindfolds. Dixie cups with rice were passed around to captivated crowds. Rockwin states, “We enjoy having musical conversations with one another and seeing what that leads to.” Rockwin says, “But we also like engaging the audience in that discussion.” From allaboutjazz