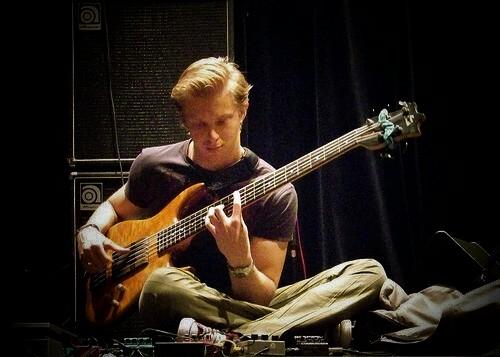 Feraud was the son of musicians. When Feraud was eight years old, his father taught him how to play the guitar. Feraud initially was more interested in drumming. After listening to “The Birthday Concert” by Jaco pastorius at the age 12 as a gift, Feraud began to study the electric bass. He was deeply inspired and motivated by Jaco Pastorius’ entire musical output. In fact, he was one of the youngest French bass virtuosos in ten years. By occasional collaborations, he expanded his musical universe and listened/studied the tunes of many other musicians, such as Christian McBride and Victor Bailey, Skuli Sverrisson and Gary Willis. His main inspirations were both Jaco Pastorius’ complete musical output and Weather Report, Pastorius on bass. Christian Pegand, John McLaughlin’s and Bireli Legrene’s concert manager, invited Feraud to perform at the 2001 concert “bass contre basse”. He had an immediate impact, being surrounded by Sylvain Lut on guitars and Franck Agulhon drums. Feraud’s immense talent was recognized by Lagrene. Bireli Lagrene Feraud met Jim Grancamp and Jon Grancamp in Strasbourg in 2002. Jim Grancamp (guitars), Jon Grancamp(drums) and Feraud (bass) formed the power-trio “Le Cartel”. They performed on many stages throughout Paris, France, and around the world. He was eager to meet new people and participated in many contests such as “Euro Bass Day 2003” which he won in Verona. In 2004, he won the French contest “Haut les basses”. Feraud began composing his first solo album in 2004. He also continued to play at Paris clubs and jams. John McLaughlin invited Feraud in 2005 to record two tracks (“For Jaco” and “Senor CS”) for his album “Industrial Zen”. This was Hadrien’s pivotal meeting. He recorded his first solo album, “Hadrien Feraud”, in 2006. With a large number of prestigious guests, including John McLaughlin and Flavio Boltro as well as Jean-Pierre Como and Marc Berthoumieux. Mokhtar Sambo, Jim Grancamp, Jon Grancamp. Dominique di Piazza, Thierry Elez, Linley Marthe. In 2007, he was part of Chick Corea’s 5trio project. He then went on tour across North America and Canada. In 2008, he went on a European tour as John McLaughlin’s member and 4th dimension (with Gary Husband playing keys and Mark Mondesir drumming). Following the release of Bireli Lagrene’s new electric band album, I was involved in arranging and producing it. From Wikipedia