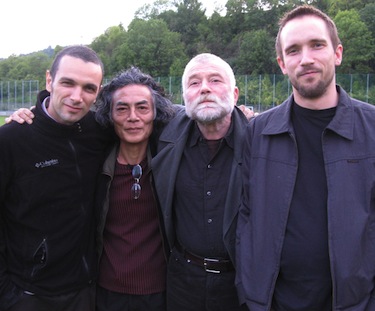 German saxophonist Peter Brotzmann began his career in 1960s and early 1970s. He performed regularly with a core group, including bassists Peter Kowald, Buschi Niebergall and drummers Han Bennink, Sven-Ake Jonsson, pianists Misha Mengelberg, Fred Van Hove and trombonist Albert Mangelsdorff. His circle of musical friends has grown and expanded over his career. In recent years, he’s been working with some of Europe’s most talented musicians. Toshinori Kondo, the Trumpeter, was Brotzmann’s front-line partner in 1990s quartet Die Like a Dog. Massimo Pupillo, the Italian jazz-noise metal group Zu, is the bassist. Paal Nilssen Love, the drummer, is a Swede who seems to be as open to collaboration as Brotzmann. The show’s two long tracks and the disc are combustible due to the combination of these players, none of which is known for their subtlety. Pupillo’s amplified, distorted sound and Nilssen Love’s maniacal drumming remind us of Ronald Shannon Jackson and Bill Laswell’s 1980s group Last Exit. Kondo’s electronically warped trumpet sounds will be familiar to anyone who has heard Die Like a Dog. The saxophonist is still up to his usual lung-bursting, reed-splintering tricks, and can be heard screeching and screaming throughout the show, despite switching between tenor, alto, and bass clarinet as the show progresses. It is thrilling to listen to, and it was certainly exhilarating for those in attendance. Whether this kind of constant blowing rewards repeated listening or adds to an individual’s impression of Brotzmann’s art will be up to each listener. All music