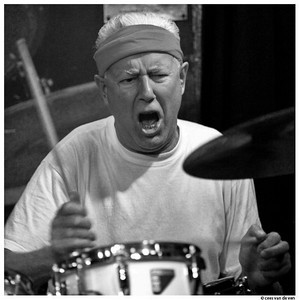 Drummer and multi-instrumentalist Han Bennink was born in Zaandam near Amsterdam in 1942. His first instrument of percussion was a kitchen chair. His father was an orchestra percussionist and Han received a more formal outfit. But Han has never lost his ability to make sounds with odd objects that he finds backstage at concerts. He still enjoys playing chairs. Bennink, a drummer who was extremely versatile in Holland during the 1960s, was quickly recognized. He was a strong swinger, in the spirit of Kenny Clarke’s hero, and accompanied jazz musicians such as Sonny Rollins (Ben Webster), Wes Montgomery, Johnny Griffins, Eric Dolphy, Dexter Gordon, and Wes Montgomery. On the 1969 album “Live At Amsterdam Paradiso”, Gordon and Dolphy can be heard together. Bennink also participated in the creation and evolution of European improvised musical music. He founded the Instant Composers Pool with fellow Dutch pioneers Misha Mengelberg, pianist, and Willem Breuker (saxophonist). Bennink was a member of various bands that were led by Mengelberg and Breuker. He also appeared in their comedy music-theater productions. Bennink studied art in the 1960s and is also an accomplished visual artist in many media. He often creates sculptures from broken drum heads or sticks. Many of the LPs and CDs he has appeared on have their covers designed by him. Bennink is represented in Amsterdam by Galerie Espace. He has also been the subject of numerous one-man shows including one at The Gemeente Museum in The Hague in 1995. Bennink performed at the 1966 Newport Jazz Festival in the USA with the Mengelberg Quartet. From the 1960s to the 1970s, Bennink worked frequently with English, Danish, German and Belgian musicians. These included saxophonists John Tchicai, Peter Broetzmann, Derek Bailey, and Fred van Hove, pianist. FMP Records has a well-documented trio of Bennink, Broetzmann, and van Hove. Bennink’s talents on clarinet and trombone as well as soprano saxophone were also displayed there. This trio was also featured on a series of solo albums that he started in 1971. Many recordings by Bennink from the 1980s include sessions recorded with Mengelberg’s ICP Orchestra (where they still remain), South African bassist Harry Miller and soprano Saxophonist Steve Lacy. Also, trombonists Roswell Rudd, George Lewis and big-bandleaders Sean Bergin, Andy Sheppard, and trombonists Roswell Rudd, George Lewis. Between 1988 and 1998, Bennink was the main driver of Clusone 3. He had Michael Moore, clarinetist, and Ernst Reijseger as cellists. This band is known for their free-wheeling blend of jazz standards, wide-open playing, and tender ballads. Clusone recorded five CDs for Gramavision and Ramboy. He also toured Europe, North America, China, Vietnam, West Africa and China. He is often heard in the quartet of Tobias Delius, tenor saxophonist, and with Cor Fuhler, pianist/keyboardist, and Wilbert de Joode. He still collaborates with jazz legends such as Johnny Griffin and Von Freeman. Since the 1960s, Bennink has been a regular performer in a spontaneous duo concert featuring musicians from many musical backgrounds. In the 1990s, he recorded with Eugene Chadbourne and Ellery Eskelin, as well as pianists Mengelberg and Irene Schweizer, and trumpeter Dave Douglas. Han Bennink has had his own Han Bennink Trio since 2008, consisting of Han Bennink and Joachim Badenhorst (clarinet) and Simon Toldam (piano). from http://www.hanbennink.com