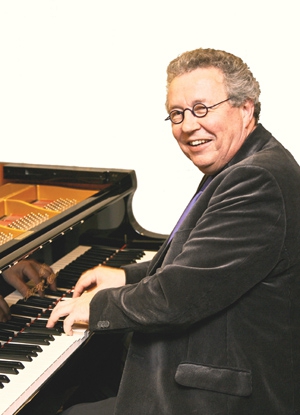 Harry Happel, jazzpianist Intrioduction, a Dutch jazz trio, was founded in 1976 by Harry Happel (a phenomenal self-taught pianist). After they were on television, Intrioduction rose quickly and played lots of jazz in the Dutch radio jazz program “Sesjun”. Intrioduction was described by the media as “exceptional class”, professional, and “swinging” after these performances. After having been asked to perform in the 1000th program, they felt honored after playing on the 100th, 250th, and 500th broadcasting years of the program. Intrioduction’s musical style is popular and has been influenced a lot by artists like Monty Alexander (Oscar Peterson), Gene Harris, etc. The trio won a third-place award in the category “modern” at the Duinkerken Jazz Festival in Belgium. They also received a first-place award for best presentation. Intrioduction has performed in several Belgian cities, including Liege, Kortrijk and the “Brussels Jazz Club”, as well in Germany’s “Jazz Club Subway” in Köln. California’s radio station had a special day dedicated to “Intrioduction”. It featured an interview with pianist Harry Happel, followed by a song from one of the trio’s records. Intrioduction performed in two concert halls in Amsterdam, “Concertgebouw”, and “de Doelen” in Rotterdam in 1989. The North Sea Jazz Festival was also attended by Intrioduction several times. A double album was made from one of these concerts. This was Intrioductions fourth album. It was released on CD by Timeless CD SJP156 in 1993. Dee Daniels, a Vancouver singer, was also a guest on their radio shows. The tour concluded with a concert at Hot Brass in Aix en Provence, South France. Harry also had musical adventures in Japan and Finland, as well as performing at many jazz festivals in the Netherlands. Harry enjoys taking on new challenges. He performed in concerts for two pianos and a classical pianist, as well as in a gospel concert at Hasselt Cathedral in Belgium with Denise Jannah. Harry has released several CDs since 2000. This album features Harry’s solo performances on a Bosendorfer grandpiano. It is simply amazing. This CD can be purchased via Challenge Records from the series Jazz at the Pinehill (PHCHR 75083). An easy-listening Christmas CD featuring vocalist Yvonne Walter is another album worth your time. Harry Happel performed with Intrioduction at the World Royal Super yacht Show, Spain in May 2008. This was the exclusive boat show that only the elite attend. Marjoleine, a talented singer from Spain, performed with Harry Happel. He produced a CD with Marjoleine’s wonderful songs especially for this show. Right now he is planning to go to Singapore in September 2008 together with Frits Landesbergen, the famous Dutch drummer/vibraphonist. Harry first visited Singapore in 2003 to explore the jazz scene. He performed at the “Hollandse Club”, Tanglin Club, Harry’s Bar, “Ritz Carlton Hotel”, and other venues in 2004 and 2005. He also performed at the Southbridge Jazz Club. The Dutch Ambassador released his latest album, “Generations”, in this club. This CD features Harry playing tohether on drums with Frits Landesbergen and his son Sven Happel, on bass. To express his feelings about creating music, Harry used a quote by Samual Ullman in the liner notes to the CD “Generations”. You can expect a top-level concert featuring Harry Happel and his talented musicians. Expect a dynamic swing with refreshing improvisations. Intrioduction’s music is powerful, energetic, and swings like a lion You can expect a top-quality concert featuring Harry Happel and his talented musicians. Expect a lively swing and refreshing improvisations. from http://www.intrioduction.com