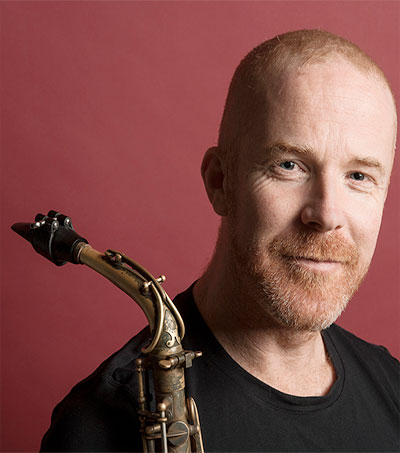 For Slowfox trio look under Slowfox. Hayden Chisholm (born 27 May 1975) is a saxophonist and multi-instrumentalist from New Zealand. He plays jazz, improvised and contemporary classical music. Chisholm was born in New Plymouth, New Zealand to parents Heather and Doug Chisholm. He first had musical experiences with Dixieland bands. At nine years old, he began to play clarinet. Two years later, he switched to the alto saxophone which became his primary instrument. His first recordings of jazz were recorded by Eric Dolphy, Sun Ra, Johnny Hodges and Sun Ra. He was part of the New Plymouth Boys’ High School Jazz Band, which won the prize for Most Outstanding Jazz Performer at the National Jazz Festival in Tauranga in 1991. Chisholm was awarded a DAAD scholarship and enrolled at the Musik Hochschule, Cologne. Frank Gratkowski taught him saxophone. He was awarded the New Zealand Young Achievers Award in 1997, which allowed him to continue his education abroad. He also studied Carnatic music at Chennai and traveled extensively throughout the Balkans to learn the various musical traditions. Chisholm’s studies in Cologne led him to develop a system for micro-tonal fingerings on the saxophone, also known as “split scales”, which he released on his 1996 solo CD Circe. These scales can be divided into perfect intervals by using quarter tones. His microtonal work was later included on Root70’s Root70 on 52nd 1/4 Street, which won the German Critics Award. He met many musicians during his Cologne studies, including Nils Wogram and John Taylor. He also worked with Mauricio Kgel, who was at the time a professor of composition. Hayden Chisholm and Rebecca Horn have collaborated since 2000. His collaboration with her ranges from composing music for major site-specific installations (“Moonmirror”) (Mallorca 2003), “Lumiere en prison” (Paris 2002), Spiriti de Madre Perla (Naples 2002), “Twilight Transit” (NYC 2004), Heart Shadows(Lisbon 2005), “Das Universum im Perle” (2006), to recomposing music for her early performance films, which were released on a complete DVD set (Berlin 2006). He was the assistant director of the Salvatore Sciarrino Op Luci mie traditrici Salzburger Festspiele in 2008. He composed the music to her film Fata Morgana, which premiered at Teatro La Fenice Opera House in Venice during the Venice Biannale 2009. He composed the music to her documentary “Moonmirror Journey”, which was premiered in Berlin in 2011. He composed the music for the German Theater in Hamburg (Deutsches Schauspielhaus), where he worked on Maria Stuart by Schiller, and Arabische Nacht from Schimmelpfennig. He was the musical director of the Earth Festival, Kenya in 2006 and 2007. It featured an international cast including Huun Huur Tu. He performed on the 2008 “World is Everything Tour” with David Sylvian. He has been teaching a masterclass every year on Mount Pilion in Greece, in Agios Lavrentios, since 2006. His course, “The G string of Pythagoras”, combines saxophone and ancient music theory with improvisation. He was the assistant director of the Salzburg Festspiele of the Opera Luci Mie Traditrici by Salvatore Sciarrino in 2008. Chisholm appeared in 2012’s feature documentary Sound of Heimat- Deutschland singt, directed by Jan Tengeler and Arne Birkenstock. The film features Chisholm’s journey through Germany to discover authentic German folk music. He released a 13-CD box set, 13 Views of The Heart’s Cargo in 2013, which contains his most important recordings from 2001. Love in Numbers is the first CD in the box. It features works for saxophone in that Chisholm explores Fibonacci’s overtone series. Hayden Chisholm was a contributor to Waywords u0026 Meansigns in 2015, a collaborative project that put James Joyce’s Finnegans Wake into music. Hayden is part of the Root 70 quartet with trombonist Nils Womo. Chisholm was a finalist in the Recorded Music NZ Best Jazz artist category at the 2018 New Zealand Jazz Awards. Wikipedia