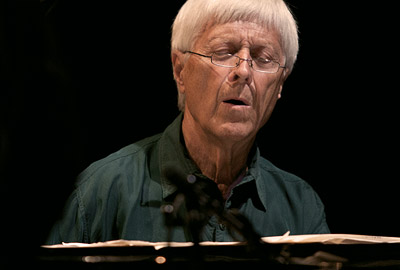 Heikki, the Finnish pianist and composer, is a prominent figure in Finnish Jazz. He has been internationally acclaimed for his orchestral, symphonic and jazz ensemble work as well as his unique mixture of idioms drawn from classical, jazz and ethnic music. Sarmanto was the first Finnish musician to be awarded a scholarship to Berklee College of Music, Boston in the 1960s. He was named Jazz Musician in Finland in 1970. The following year, he received top prizes at the Montreux Jazz Festival for both combo and piano. Sarmanto performed “Suomi”, a symphonic jazz poem, in Carnegie Hall in 1988. He was accompanied by his quartet and the New York Pops Orchestra. His “New Hope Jazz Mass”, which he composed for mixed choir, jazz ensemble, and soprano, had been commissioned a decade before for the New York Saint Peter’s Church opening. It was also performed at the Newport Jazz Festival. Sarmanto recorded and premiered “Hearts” in 1995 with the Finnish Radio Symphony Orchestra. He also premiered “Perfect Harmony” with the Finnish Radio Symphony Orchestra at the Savonlinna Opera Festival. This work was written in collaboration by librettist Gregory Allan Freelon and featured Opera Ebony in New York. Sarmanto’s commissioned operatic work “Manon”, was completed in 1996 for the Finnish National Opera in Helsinki. With Opera Ebony, Sarmanto’s u0026 Freelon’s “Perfect Harmony”, were performed in 1996 at Kemi’s World’s Largest Snow Castle, Finland. Sarmanto has over 30 recordings, many published scores and songbooks. He also has a number of film scores. In addition to his collaborations with jazz-legends like Sonny Rollins and Art Farmer, Helen Merrill, and George Russell, he also works in the classical arena as a baritone with Jorma Hyninen, the Finnish Radio Symphony Orchestra, and the Tapiola Children’s Choir. Sarmanto was named Artistic Director of UMO Jazz Orchestra in September 1998. from http://www.sarmanto.com