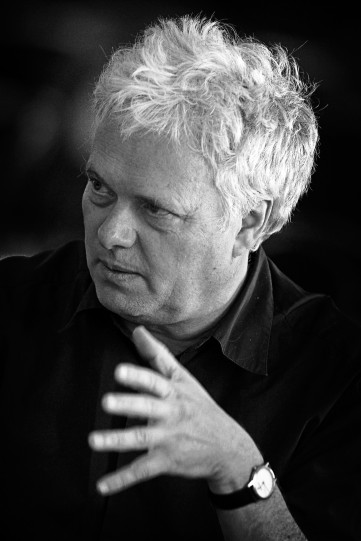 HEINER GOEBBELS, born on August 17, 1952 in Neustadt/Weinstrasse, lives since 1972 in Frankfurt/Main. He studied music and sociology. He was involved in many record productions and concerts with the Sogenanntes Linksradikales Blasorchester 76-81, the Goebbels/Harth-Duo 76-88, and the art-rock-trio Cassiber 82-92. He also wrote theatre music for Hans Neuenfels (Hans Neuenfels), Claus Peymann and Ruth Berghaus, as well as film music (for Helke Sanderser, Dubini Brothers and many other directors) and ballet music for the Ballet Frankfurt. He began to compose and direct audio plays in the mid-80s, most of which were based on Heiner Mueller Verkommenes. He created the musical theatre pieces Newtons Casino in 90 and Roemische Hunde in 1991 at the TAT in Frankfurt. Heiner Goebbels has been composing ensemble music since 1988 for the Ensemble Modern (Red Run. Befreiung. La Jalousie). Surrogate Cities was composed for large orchestra by Peter Rundel and was performed by the Junge Deutsche Philharmonie in 1994. 1996: He composed Industry as a commission for Donaueschingener Musiktage.